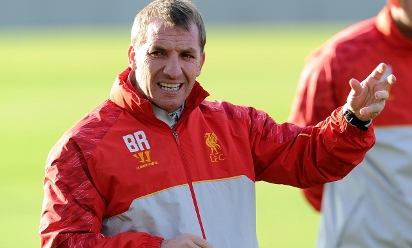 Rodgers on Allen, options and systems

Brendan Rodgers will mark his 50th Barclays Premier League game in charge of Liverpool against Everton today - and he's hoping his side can make it an occasion to savour by triumphing in a fixture he believes is 'more than a game'.

The boss will reach the milestone at Goodison Park as the Reds go head-to-head with the Blues in the lunchtime kick off.

For Rodgers, it will be his third experience of a Merseyside derby having overseen two draws in last season's meetings - experiences he feels he benefitted from.

Now he's confident Liverpool have what it takes to become the first team to beat Everton at home in the league this calendar year.

"These are games that you just remember what they're about [in the build up]," Rodgers told Liverpoolfc.com. "It's more than three points - it's about bragging rights for the supporters, so when they go into work on the Monday morning, or go out on Saturday night, they can be proud of their team and how they fought for the result.

"It's more than a game - it's a game you're representing the shirt and your supporters in and of course one you want to win.

"It's never an ideal preparation when you haven't been together for a couple of weeks, but we're coming in on the back off our last league game, which was a great performance and result. A lot of the players have gone away and done well; some have qualified for the World Cup.

"The group came back in on Thursday, we trained then, and we'll be ready for the game.

"The team spirit amongst them is very, very strong. That obviously grows when you win games. They're all really looking forward to the game and, having experienced them, last year, I know they're right up for them."

When put to him that a Merseyside derby at Goodison Park wasn't a bad way to mark 50 league games in charge of the Reds, Rodgers added: "No it isn't, and it would mark it better if we won the game! That will be the focus.

"It's been a privilege for me to be here. I remember my first ever competitive game, which was against Gomel in the Europa League. Every game here as the manager of the football club is special. It'd be nice to celebrate 50 league games with a win." 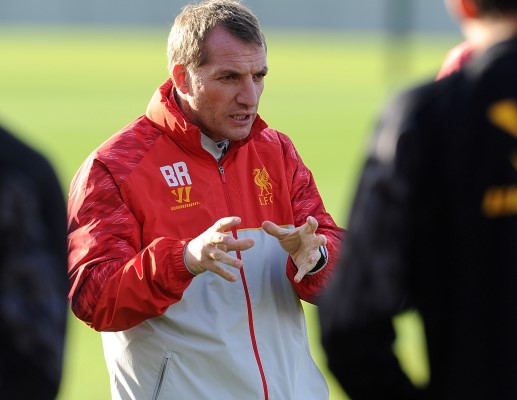 Last season's corresponding fixture saw Liverpool race into a two-goal lead across the park thanks to a Luis Suarez brace in Rodgers' maiden derby.

Everton rallied and drew level before half-time, but Suarez had what would have been a 90th minute winner ruled out for offside, though TV replays suggested the effort should have stood.

There wasn't to be a similar level of excitement in the return meeting at Anfield in May, which ended in a goalless stalemate.

"I've obviously seen a lot of derbies in my time and been involved in some - but the intensity of it was certainly different," Rodgers said, when reflecting on his first experiences of the Merseyside derby. "There was no time to breathe, really. It was just such a whirlwind of a game with the emotion and everything. It's something that really takes you aback.

"The first game we should have won - we were 2-0 up and got pegged back to 2-2, then had a goal disallowed that should never have been disallowed. The second game wasn't a good spectacle - it wasn't a good game. There was so much tension in it and it didn't make for a good game of football.

"We're looking forward to it. We've started the season well and this will be another good test for us. I'm sure we'll do well."

Though now fully aware of the fervour these contests are played in, Rodgers insists he'll still be sending his side out in the same fashion.

He explained: "It won't alter the approach, I just think it's good for anything you do in any walk of life to have that experience.

"When experiencing anything for the first time, you'll always evaluate, look back on it and see if you can be better. The atmosphere will be intense - Goodison Park can be a hostile ground - but that's what you'd expect in a derby game. Players with character and resolve is what we've got in the team now - we're very resolute in our minds.

"We'll go there and we know we can get a result. We've scored 21 goals in 11 games, so we're averaging nearly two goals a game - so we know we can go to any ground and score goals, and that will bode well for us on Saturday."

Rodgers continued: "Our game is based on an aggressive possession game - and if you look at our game at home to Fulham, that's what really typified that.

"We had nearly 70 per cent possession, we made just under 700 passes in the game which shows our fluency and flow of our game was good, we had over 30 shots at goal and we scored four, and maybe could have had one or two more.

"Those numbers and that figure will tell you it's a possession-based game, but it's always to penetrate. That's an important part of our game - possession is no good on its own, it has to be to penetrate, and that's something we work very hard on."

One man who'll be out to thwart Liverpool's attempts to collect three points is five-goal striker, Romelu Lukaku.

The Belgian found the back of the net twice against the Reds last season for West Bromwich Albion, but Rodgers is confident his defensive charges can quell the threat.

"He's a good young player who has come out [to Everton] to get games and he'll play up there with a player in behind him," he said.

Victory for Liverpool will move them back to the Barclays Premier League summit at least for a few hours ahead of Arsenal's home clash with Southampton.

"Whatever time of the season it is, if you can be at the top of the table then it means you're working well, so for us we want to continue our good work," he stated.

"We understand it'll be a tough game for us, but these are the games where we can take points from our rivals. That's our aim."

On the contrary, a win for Everton would draw them level on 23 points with Liverpool.

So, will that come into the manager's pre-match team talk?

"No, not at all," insisted Rodgers. "I always work on the optimistic side of the game.

"Whatever way the result goes at the weekend, it won't define the whole season. It's an important game because it's against a rival and a derby here on Merseyside, but it's not going to alter too much where we're going to finish up.

"But make no mistake, we want to go and take the three points." 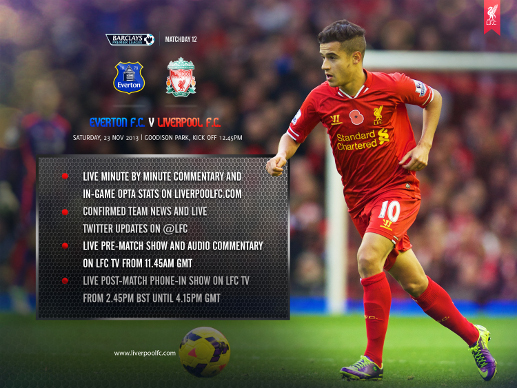