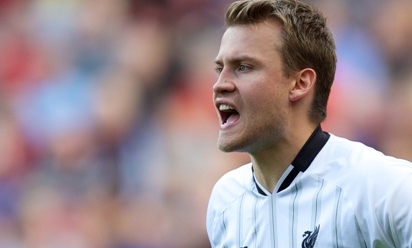 Simon Mignolet is happy to offer vital pointers on how to keep Everton's Belgian attackers at bay - but he'd rather Liverpool focus on their own game.

The stopper knows all too well about the threat his countrymen Romelu Lukaku and Kevin Mirallas could pose when the Reds travel to Goodison Park for the Merseyside derby on Saturday.

Lukaku has been in fine form for the Blues since arriving on a season-long loan from Chelsea in the summer, plundering five goals in seven appearances.

Meanwhile, Mirallas was a constant source of danger for Liverpool during the first half of last year's Goodison encounter, before he was substituted at the interval.

However, Mignolet is confident the Reds' back-four are sufficiently equipped to handle Lukaku and co during the weekend's clash.

"Lukaku is a physical presence and he's a good player," Mignolet told Liverpoolfc.com. "He's strong on the ball and he tries to finish.

"They've also got Mirallas, who is playing very well at the moment. I'm sure they will be up for it.

"But for us, whoever who is playing on Saturday will be there to get the result. We're more focused on ourselves than on the opposition.

"All our defenders know about the strikers in the Premier League. They analyse these kinds of things. If they come to me and ask for advice [on Lukaku and Mirallas] I'll definitely give it to them.

"But everybody will be prepared for the game and know the strikers that Everton have - not just Romelu - but the others as well. They will know them inside out."

Liverpool bounced back from defeat to Arsenal at the Emirates with a convincing 4-0 win over Fulham at Anfield in their last Barclays Premier League tie.

The victory was another example of the Reds' fluent attacking play, which has helped propel them to second place in the table this season.

However, it also brought a first shut-out in eight games for Mignolet and his defence - a fact that has buoyed spirits further ahead of the trip to Goodison.

"It's always nice to keep a clean sheet," said the 'keeper. "Obviously the most important thing is to try and win the game and we did that quite comfortably against Fulham.

"But in the end, if you can keep a clean sheet, it's always a positive and it was nice to take into the international break and now into the Everton game.

"So hopefully we can do the same things on Saturday. It's always important to keep clean sheets, because it gives you the safety to go out and play.

"It means that if you score once, you can win the game. Of course, we've got goals in us with our strike-force up front, but if you can keep a clean sheet, it just makes it easier to win games."

Brendan Rodgers opted for a change in tact for the Fulham rout, bringing Philippe Coutinho back into the starting line-up and shifting from a 3-4-1-2 formation to 4-3-3.

Mignolet sees this flexibility as a positive - and explained how players must be able to adapt to fit different styles when the manager decides a change is necessary.

"My role changes, but then any role changes with each style of play," he said. "It's the same for me and for all the other lads.

"If you're a professional football player and your gaffer wants to play in a certain manner, you have to do that. Everybody needs to be comfortable enough to play any style."