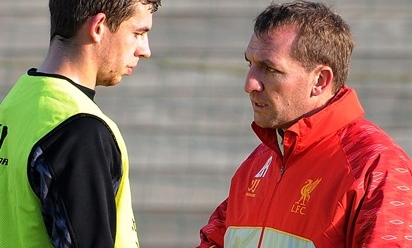 Reds boss Brendan Rodgers has revealed he would have no qualms about handing young defender Jon Flanagan a place in his Merseyside derby team at Goodison Park on Saturday.

In the absence of the unavailable Glen Johnson, the Academy right-back was handed a start against Arsenal at the Emirates Stadium earlier this month.

Although the Reds were defeated 2-0 on that occasion, the No.38 won praise from his manager for the performance he contributed in North London.

With regular left-back Jose Enrique ruled out of contention for the coming weeks, Rodgers will now consider Flanagan as a potential replacement.

The boss told the Liverpool Echo: "With Jose out, I've got Aly Cissokho, who came in as cover, but I've also got other options like young Jon Flanagan.

"Jon has been outstanding in training and he seems to be getting better and better. He did very well against Arsenal. He didn't do anything wrong in that game.

"When he came off, it was simply because we wanted to be more offensive as we were chasing the game.

"Jon is a young player who will never let you down. Of course it's disappointing if you lose your No.1 left-back but it's an opportunity for someone else to come in and do well.

"I'm not concerned about that position. Cissokho and Flanagan can both play there."