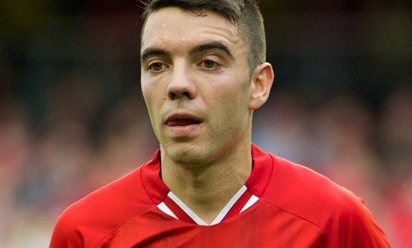 Liverpool forward Iago Aspas has pledged that he will improve his level of performance when he completes a return from injury in the coming weeks.

The Spaniard has been ruled out of action since mid-October with a thigh injury suffered in training at Melwood, following half-a-dozen appearances for his new club.

In contrast to the free-scoring exploits of teammates Daniel Sturridge and Luis Suarez, the Reds' No.9 has yet to find the target since his summer move from Celta Vigo.

The 26-year-old declared himself dissatisfied with his output so far, but is determined to show off his qualities when he can come back to competitive football next month.

He told Liverpoolfc.com: "Not playing is frustrating, but I can take advantage of this stoppage, and try to get back to playing as soon as possible.

"I think I can improve; I am happy with the team's level but not so much individually because I think I can do a lot better.

"First I want to recover from my injury and afterwards I can use my qualities better and exploit them better as a centre-forward.

"I have been injured for four weeks, but I have been training for four or five days on the pitch - running and exercising. I am a lot better.

"Soon I will be able to kick the ball. In 10 days to two weeks I will be ready to play."

Aspas paid special recognition to the club's medical staff for their support during his recovery - which included an unexpected benefit to his adaptation.

"They were a great help to me, and it has also been good for me because I have learnt some English dealing with them," he continued.

"Now we are dealing with the physical aspect, which is also very important."

Liverpool have collected seven points from their fixtures since Aspas' injury, securing second place in the Barclays Premier League in the process.

So, what has he made of his colleagues' efforts from a different vantage point?

The striker said: "My impression is very good - you just have to look at the table to see how well the team is working. We are pressuring and playing well.

"This league is totally different from the Spanish league and there is greater equality between teams."