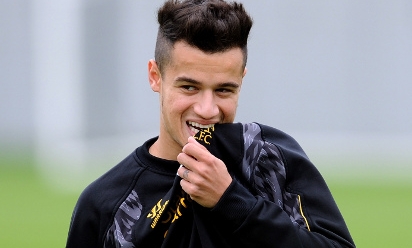 Boss launches search for next star

Philippe Coutinho insists the support he received from Liverpool fans during his recent injury lay-off helped keep his spirits lifted throughout his stint on the sidelines.

The 21-year-old sustained a shoulder injury against Swansea City on September 16 and required surgery that kept him on the treatment table until last Saturday, when he made his return to action at Arsenal.

Coutinho admits it was a difficult period in his career, but is eager to highlight what impact the messages he received from Reds fans via Twitter had upon his recovery.

He told Liverpoolfc.com: "The fans' support was very important. They were always sending me messages through Twitter, which were very gratifying. I read them every day and they motivated my recovery.

"I´m very happy to be back. I had six very difficult weeks and thank God I've made my comeback, but on the other hand I was sad due to the result [at Arsenal].

"However that's over now and we must concentrate on our upcoming matches."

In total, Coutinho missed six fixtures after undergoing surgical stabilisation on the AC joint in his shoulder.

However, the Brazilian believes he returns to the fold much stronger.

"It was really difficult. I'd been fine until then and having to stop suddenly for six weeks was very frustrating," he said.

"Furthermore I had to undergo surgery and recovery was complicated, but thank God I'm back now and stronger than ever."

Liverpool maintained their impressive start to 2013-14 in Coutinho's absence - and now back in contention, he's hopeful they will continue in a similar vein of form.

"It was really hard to sit out and have to watch the matches," he concluded. "You feel like getting out there and playing!

"Nonetheless, I feel that the team has played well and I hope we keep it up until the end of the season."