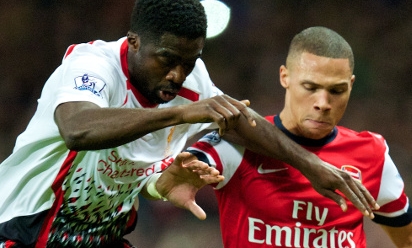 Liverpool suffered their second Barclays Premier League defeat of the season as they went down 2-0 to Arsenal at the Emirates on Saturday evening.

The Gunners took the lead inside the opening 20 minutes when Santi Cazorla reacted quickest to blast home after he'd watched a header rebound off the post.

The Reds began the second period in positive manner as they sought an equaliser, but Aaron Ramsey's dipping 20-yard drive doubled Arsenal's advantage just before the hour.

Luis Suarez hit the base of the post as Liverpool looked to claim something from the game, but Arsene Wenger's men held out to remain at the top of the table.

The pre-match team news confirmed Liverpool were without the services of Glen Johnson due to illness.

Jon Flanagan was the England man's replacement, making his first appearance for the Reds since the FA Cup tie with Mansfield on January 6 in what was an otherwise unchanged starting line-up. Meanwhile, the fit-again Philippe Coutinho was named on the substitutes' bench.

The game got underway with second-placed Liverpool trailing table-toppers Arsenal by just two points, with both teams having only lost once in the opening weeks of 2013-14.

Tomas Rosicky fired the evening's first effort with six minutes on the clock, finding space inside the box only to see his effort across the face of goal diverted wide by the palm of Simon Mignolet.

At the other end, Jordan Henderson bounded into the area only to miscue when well positioned to shoot.

The opening exchanges had been fairly even, with the visitors having settled into their stride positively in north London.

However, Arsenal took the lead with 19 minutes on the clock when Bacary Sagna found space down the right. The full-back's centre picked out of the head of Cazorla, whose initial attempt cannoned against the post before he swept home the rebound.

Liverpool almost mustered a swift riposte, but Kolo Toure's downward header from Steven Gerrard's free-kick was blocked by the boot of the sprawling Wojciech Szczesny, though the flag was raised for offside in any case.

Back came the hosts and Mignolet needed to get down to repel Ramsey's drive after a slick one-two with Rosicky.

Brendan Rodgers opted to make a change during the break, introducing Coutinho into the action in place of Aly Cissokho.

The manager will undoubtedly have been urging more from his players going forward during his half-time team talk, and that's what was delivered in a positive opening to the second 45.

First, Suarez escaped the attentions of Arsenal's defence to race into space in the right channel of the box before toe-poking off target. Then, moments later, he was again afforded space in a dangerous area and the No.7's cross to the back post was volleyed over by Henderson.

But the Reds' promising work was almost undone when Olivier Giroud beat Martin Skrtel to Toure's under-hit pass, but the striker's attempted chip found the side netting.

Arsenal didn't have to wait long to claim a second, however, when Ramsey connected with a half-volley that looped over Mignolet and found the back of the net from 20 yards on 59 minutes.

Victor Moses replaced Flanagan as Liverpool attempted to set about salvaging something from the clash, and they almost had a goal back when Suarez's outside-of-the-foot effort struck the base of the post from a tight angle.

Liverpool continued to toil in their endeavours to reduce the arrears, and Suarez spurned a gilt-edged chance in the dying moments as he side-footed wide when through on goal as Arsenal held on to clinch victory.