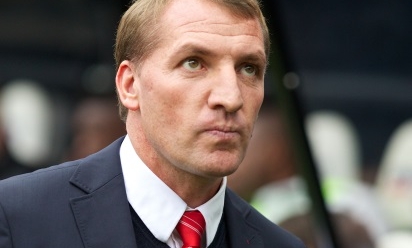 Despite being impressed by a strong start to the 2013-14 campaign, Liverpool manager Brendan Rodgers insists there is still plenty of room for improvement within the squad.

The Reds travel to the Emirates on Saturday, where a win over Arsenal would see them overtake Arsene Wenger's early pace-setters on points.

Rodgers' side face stern competition in the form of a Gunners outfit that has won seven of their last eight league matches.

However, he feels there is a sense of belief around Melwood that will allow Liverpool to play with a degree of confidence in the capital.

"I believe we are in a good moment," Rodgers told reporters gathered at the club's West Derby training base.

"We have started the season as we would have wanted - strong, putting a marker down that we're going to be consistent and after that early period, we've been playing very well.

"I think that we can get better and we can improve. We've got a lot of young payers that are still developing and improving.

"That also goes for the front two, who everyone is talking about. Daniel [Sturridge] is 24 and he's improving all the time.

"With Luis Suarez, everyone talks about his goals and his work-rate, but I've seen an improvement in his footballing ability and his maturity this year. So that really bodes well for us.

"We won't get carried away. We'll have to keep our concentration and continue to work very hard on the training field.

"We were happy with how we worked last weekend against West Brom, but it was forgotten about very quickly and our focus has been very much on this game and the quality of our training this week has been outstanding.

"We arrive in the game really confident and high in belief, coming off the back of an outstanding performance."

Arsenal have made an impressive start to the current campaign. Summer signing Mezut Ozil has added a touch of class in behind the rejuvenated Oliver Giroud, who has thrived on the supply from the likes of Aaron Ramsey and Jack Wilshere.

Rodgers is all too aware that while Liverpool can call on the likes of Suarez and Sturridge in the clash, his opposite number, Wenger, also has a wealth of attacking options at his disposal.

"Arsenal are an excellent side, who have started the season very well," said the Reds' boss. "They can score goals and they have some top players.

"Ozil is a wonderful player. I watched him as a young player and it was a surprise that Real Madrid moved him on. He's a talent, he's gifted, and he's got a wonderful touch and good pace. He can create goals and score goals.

"Arsene is a manager I respect. When he came into the league here more than 15 years ago he changed the coaching landscape, really. He came in with his ideas and his methods of work. He inherited an outstanding group of players, but over time he added to that and changed the identity of the club.

"Really, now, Arsenal Football Club is very much Arsene Wenger in every way, on and off the field. He's a man who has been brilliant for British football and a guy who has already won the league and other trophies.

"He's been fighting over the last number of years to win trophies and I'm sure he'll see this year as a chance to do that.

"But Saturday's game is set up - there are some wonderful talents on both sides, so it should be a wonderful game."

Elsewhere, Liverpool's on-loan striker Fabio Borini was in fine form for Sunderland at the weekend as he smashed the winning goal of the game to settle the Tyne-Wear derby against Newcastle.

It was Borini's fourth appearance in the league for his new club; however, his first goal for the Black Cats, which handed them a precious 2-1 win, has already earned him something of a hero's status on Wearside.

Rodgers said: "Fabio is a young player who has been unfortunate, really. He came in and he got injured early on. He was out for a period of time and so it was difficult. That first year for a lot of players at a big club is difficult.

"He was a player who I felt needed games. He's got talent and you saw that with his goal the other day. His quality cutting in and his touch and strike was brilliant. I know him very well. He's a young player that needs to get experience of games.

"I just felt this year, with us having limited games outside of the league, that I had players, especially the young ones, who weren't going to play so much. I needed to plan forward in order to get these players to maximise their potential for Liverpool.

"Sometimes that will mean going out and getting games. And with the likes of Fabio, that's why he's gone to Sunderland, to get some game time there. He's definitely got a future here. He's a talented young player and one who, over the next few years, will hopefully develop well."

Meanwhile, the manager reserved special praise for the Boston Red Sox after their momentous World Series win at Fenway Park on Wednesday.

A 6-1 victory over St Louis Cardinals meant they were 4-2 winners in the series, and scooped the prestigious prize for an eighth time.

"I sent my congratulations," said Rodgers. "I saw the images on the television this morning and it's brilliant for them. I think it's another demonstration of how [Fenway Sports Group] are an organisation that have proven to be successful.

"I was aware of the changes they were making there in order to bring about that success. I think it's clear that they are a group who has a clear and deliberate plan of how to get success. They run organisations extremely well and sensibly, while being successful at the same time.

"I'm delighted for all the hard work that they put in and it's something that we're very pleased with. You have to give big congratulations to them.

"They're trying to do things in a way here that is sensible, while recognising the expectancy - which is to succeed. And for us, that is the long-term aim.

"We want to be up there challenging and winning trophies. That's what Liverpool is about and there will not be any shying away from that. That expectancy will always be here and that's something that we relish."