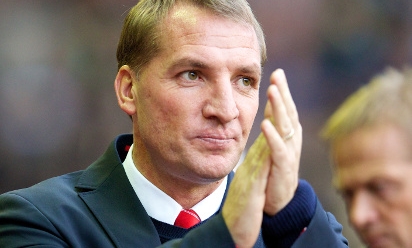 Brendan Rodgers believes Luis Suarez and Daniel Sturridge demonstrated exactly why they're 'as good as it gets' after the duo put West Bromwich Albion to the sword in a 4-1 triumph on Saturday afternoon.

Suarez claimed his first Anfield hat-trick with a wonderful treble to send the Reds racing into a three-goal lead.

The Uruguayan opened the scoring with a fine solo effort on 11 minutes before adding a second soon after, sensationally heading into the top corner from the edge of the box after connecting with Aly Cissokho's cross.

Suarez secured his third when he glanced in Steven Gerrard's free-kick just after half-time, though James Morrison reduced the arrears for the Baggies by driving home a penalty.

However, Sturridge made certain of an emphatic victory when he found the back of the net with a stunning 20-yard lob at the Kop end.

It means that in just 11 Barclays Premier League starts together, the Sturridge and Suarez partnership has yielded 17 goals - and Rodgers was left to once again wax lyrical about their talents.

Afterwards, the boss told his post-match press conference: "I think the front two were brilliant. Suarez's goals were exceptional. He really exploited the space in front of their centre-halves.

"[For his first] he showed wonderful invention and creativity to nutmeg Olsson and then he took his shot really early.

"The second was a good team goal. We moved it well, the cross came in early and he guided the header in fantastically well. Then his third goal was from a great ball by Steven.

"He could have had more; he hit the crossbar and had some other opportunities in and around the area.

"I think it was his first hat-trick here at Anfield and you saw his commitment to the team and what we're trying to do. It was a wonderful performance.

"Daniel Sturridge's goal - you used to see goals like that here many years ago; top quality players scoring those types of goals, Kenny [Dalglish] and whatnot. That type of goal today was incredible.

"It was a great performance right the way through and very pleasing."

The 4-1 win was Liverpool's most emphatic victory of the season so far and journalists were eager to know whether Rodgers felt it was his side's finest display of the campaign to date.

He replied: "Yes, absolutely. I thought we looked a very good team today. Throughout the side, the confidence was good, and cohesively how we pressed the ball was good.

"The front two are as good as it gets and the support behind them is very good, and we've got players like young Coutinho to come back next weekend."

Rodgers also offered an interesting insight into what he felt was the key factor behind Liverpool's victory.

The manager believed the manner in which his players pressed West Brom in advanced areas as they attempted to retrieve possession ultimately paid dividends.

And it was particularly satisfying for Rodgers having worked on it in training at Melwood in the lead-up to the Baggies' visit to Anfield.

He said: "You've got to respect them, they're a very good side, but it was really more about how good we were today.

"Steve [Clarke] has done an excellent job there - only a few weeks ago they went to Old Trafford and won, and everyone looked at that as a great performance.

"Today, we pressed the ball much better - I think that was the key for us. Our idea is to press the ball high.

"We had a couple of weeks during the international break when a lot of the players were away and it was hard to find cohesion and structure.

"I said at the beginning of the week to the players they needed to get back to pressing the ball higher, and that would allow us to dominate the ball more. I thought how we pressed it, high up in those areas, was excellent."

Rodgers opted to make one change to his starting XI from the team he deployed at Newcastle last weekend, with Lucas Leiva returning to replace Victor Moses.

The Brazilian had missed the trip to St James' Park following the birth of his second child, while he'd also previously sat out Crystal Palace's trip to Anfield due to suspension.

"When you play that system, I've been looking to have someone in that controlling role," Rodgers reflected when asked about Lucas. "That allows the other two advanced players to go forward.

"Lucas came in and filled that really well today. I thought he was excellent in his performance, as were Jordan Henderson and Steven.

"They made good forward runs and were always available for the ball. It was very, very good."

Rodgers concluded his press conference by highlighting a home record that has seen Liverpool lose just twice at Anfield in the Premier League in 2013.

Nonetheless, the 40-year-old reiterated his belief that there is much more to come from his charges.

"If you look at our record last season, we were outstanding against 'smaller' teams," said Rodgers.

"It was actually against the bigger teams that we never got the wins; we would draw those games and we lost one or two.

"Those games that we 'should' have won last year, we did win. There were obviously a couple of games that we lost. But we've only lost twice here in the calendar year.

"When I came into here, it was very difficult to find a win here at Anfield. Now we're creating an environment where it's a difficult place to come.

"That was the idea - get through to January with the squad that we have, keep the confidence up and hopefully we'll assess it and reinforce from there, like we did last January.

"Hopefully, all being well, players stay fit and we keep the momentum and form going - because I think from January onwards we'll continually get better."