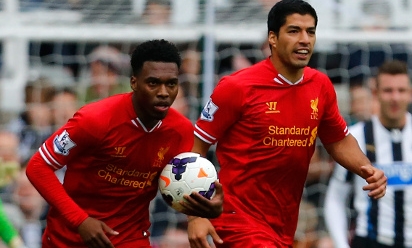 Luis Suarez today outlined why he is savouring being part of one of the world's most prolific partnerships with Daniel Sturridge, and offered his insight into why they’re so deadly when combining for Liverpool.

The duo have formed a devastating strike force for the Reds since Sturridge arrived at the club in January, plundering 17 goals and countless assists between them.

The pair were at it again against Newcastle last weekend, with Suarez teeing up his fellow forward for Liverpool's equaliser at St James' Park, and the Uruguayan is thrilled with their link-up.

The No.7 told Liverpoolfc.com: "I am so happy because when you have a very good striker, and a very good partner, for defenders it is difficult because they have to give their attention to two players - not just one.

"If maybe two defenders come towards me, this creates space for Danny. This is important not just for me, but for the team and our confidence.

"He is a very good player. He had difficult moments at Chelsea and City, but this is a good time for him and I am so happy with him."

In a recent interview about working in tandem with Suarez, Sturridge described the partnership as a 'beautiful thing'.

Liverpool's Salto-born forward believes there is more to come from the pair - and insists it's something they're working tirelessly on to achieve.

Nonetheless, Suarez is eager to point out there is much more to the attacking vigour of Brendan Rodgers' side than just the front pairing.

"We are trying for progression," he said. "He is 24 and I am 26, so we are trying our best to progress for the future of the club.

"We know in the last few seasons, Liverpool have been not been in the Champions League and we know we can help the team challenge for the top four."

Suarez added: "We will try our best [to improve], but Liverpool is not only Suarez and Sturridge - it's the whole team.

"When I was banned, Iago was playing, Philippe has been playing and although now he is injured, he will come back and help the team. We've also had other players come back, like Johnson, and this is important for us."

Sturridge's goal at Newcastle was his 20th for Liverpool in just 26 appearances, making him the fastest player in Liverpool's history to reach the milestone since Fred Pagnam in 1915.

Asked if the presence of another goal-getter in the team changed his mentality when stepping out onto the pitch, Suarez joked: "Yes, because the responsibility is with him now - not me!

"Whether Danny scores, I score, or Stevie or another player scores, I am so happy and so are the team.

"When you have one man in the area, it's more important. I am not a real No.9 in the area, but Daniel is more so and that's important for me and the team."

Between them, the duo have managed 36 shots on goal so far in the Barclays Premier League this season.

Suarez feels he and Sturridge are on the same wavelength when it comes to getting efforts in on goal inside the box.

"For a striker, it's more difficult [to look for a teammate]," he explained. "In the area, you're concentrating on yourself and shooting at goal.

"If he shoots or if I shoot, we are both strikers and we understand. We can discuss it on the pitch, but we work really well together."

Suarez has previous experience of attacking in tandem for his team - the former Ajax star struck up a prolific understanding with Klaas-Jan Huntelaar during their time together at the Dutch club.

He's confident, however, 'the SAS', as they've been dubbed by fans, have what it takes to surpass his double-act efforts in Amsterdam.

"Three or four years or more ago, when I played with Klaas-Jan Huntelaar at Ajax, he had a very good partnership with me," said Suarez.

"Now, with Daniel we are trying our best and we can improve. Maybe in a few years I will be able to say my best partnership was with Daniel Sturridge, especially if we can continue to progress."

The sight of Sturridge's trademark 'ride the wave' dance after a goal has become a familiar sight for supporters, as has the 'El Pistolero' celebration of Liverpool's top scorer in 2012-13.

"No, never!" he laughed. "After he scores, he dances and I like that because I also have a celebration. When a striker scores, it makes him so happy."