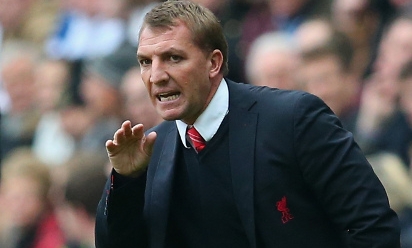 Brendan Rodgers was hardly surprised to see Reds captain Steven Gerrard claim his 100th Barclays Premier League goal at St James' Park today – and predicted many more to come from the No.8.

Gerrard converted a 41st-minute penalty to draw the away side level in the clash after Mapou Yanga-Mbiwa was shown a straight red card for his professional foul on Luis Suarez.

The 33-year-old midfielder was calm and composed as he swept the ball beyond Tim Krul to net his 100th Premier League goal for the club.

Rodgers said at his post-match press conference: "Steven is a player who I have watched for many years.

"For me, his best league goal came at this ground when he played Newcastle and scored an absolute screamer here from a free-kick in 2008.

"So to get his 100th goal here is great for him. He always scores against Newcastle. He's an incredible player. As a captain, he's been brilliant and he understands the manager's role and he respects it.

"He's got many more goals to come as well. You see his fitness level and people ask how, at 33, he's able to play two really tough international games at a high level.

Gerrard's strike cancelled out Yohan Cabaye's stunning opener in the game - but Newcastle struck back when Paul Dummett ghosted in to side-foot beyond Simon Mignolet and restore the home side's lead.

Link-up play between Suarez and Daniel Sturridge allowed the Reds' No.15 to equalise late in the game, before the visitors created a host of chances to win the match.

The manager reflected: "It's a little bit of frustration in terms of not getting the three points.

"But on the back of an international break and with 13 players away and some not coming back until Thursday night, to come over to St James' Park is never an easy place to come. To go behind twice in the game and to come back and then show moments of real quality I was pleased with.

"It's a point that we'll hopefully look back on at the end of the season and say is a good point having been behind twice.

"I just felt it was one of those games where we couldn't quite make the breakthrough, but everything that the players put into the game was exceptional. A lot of them have played two international games and played around the world, so I've got no complaints.

"I think what I can look to is that we're not getting cut open as a team. No-one is really playing through us and moving us about.

"The goals we conceded were disappointing. We conceded from a set-piece against Crystal Palace and it took a wee bit of the gloss off the performance. Today we could do better. Cabaye is a wonderful player and it was a great shot.

"It dipped at the end, but we can look at that and feel that we can stop it. The second goal was a mistake. We just lost our man and he's nipped in and finished it really well. These are goals that we can avoid, for sure."

Jordan Henderson played the full game in the middle of the park alongside Gerrard - and Rodgers praised the youngster for another assured performance.

The boss believes Henderson can be a key player for the Reds in the coming years, and lauded the 23-year-old's recent displays.

"I think he's going to be a top player for many years for Liverpool. He'll be an unsung hero. He's one of those guys that does a lot of work and, over time, supporters will really appreciate him.

"I've been really impressed. Tactically, his understanding of the game is improving. You can see the composure.

"He's got great physicality and he can run and press the ball well. I think at 23 years of age, all the best years are ahead of him. He's shown now that he's got the right temperament to play at a big club.

"He's going to be a very important player for us in the future."