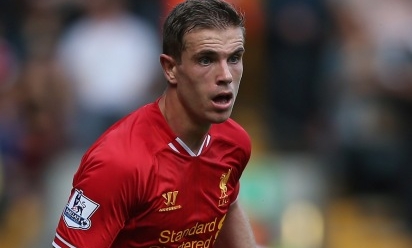 Jordan Henderson insists he's happy to play anywhere across the midfield for Liverpool – and has revealed how he relishes the challenges that accompany such a varied role.

Henderson has been a versatile regular for the Reds this season, taking up a number of positions during the nine games in all competitions so far.

And the 23-year-old explained why a strong understanding of each role has allowed him to operate as a wing-back, a wide man and a central midfielder since the start of the campaign.

"Tactical awareness was one thing I felt as though I needed to improve on," Henderson told Liverpoolfc.com.

"When the manager first came in, we had a few discussions about that and what I needed to do. And I felt as though the manager really helped me to do that, along with the coaching staff. I learn from the players as well.

"Playing in these different roles is all about knowing your job, tactically, and where you need to be on the pitch and what you are trying to do defensively as well as going forward.

"Wing-back is a position where, especially nowadays, it's about going forward as well as defending. You need to be able to do both.

"But especially in the way we like to play and control the game - you definitely need to provide the width going forward."

He added: "I feel as though I'm improving on that all the time. The main thing is that I'm playing football and that's what we all love to do, so hopefully I can continue to do that.

"I enjoy it. There are different challenges. I think you've just got to try and know the role that you are playing as best you can.

"I've played a few positions. But I think I've played them enough to know the role and the manager has helped me improve all the time in different positions and showed what he wants me to do.

"I went away and worked on that and so hopefully I can keep improving and do my best for the team."

Henderson has been delighted by Liverpool's impressive start to the 2013-14 season, which has seen them rise to joint-top in the table after seven games.

He believes the fine form can be put down to the harmony that exists within the squad - something which has been built up gradually over time.

The No.14 explained: "We're in a great position, but there's still a long way to go.

"We need to make sure that we keep our performance level high and that we're more consistent over the course of the season.

"The manager has had a bit more time to put his stamp on what he really wants to do and I felt as though even last season, as the campaign went on, we really progressed as a team and finished really strongly.

"So I think having another pre-season together and then starting the season so well, we've picked up where we left off and hopefully that can continue."