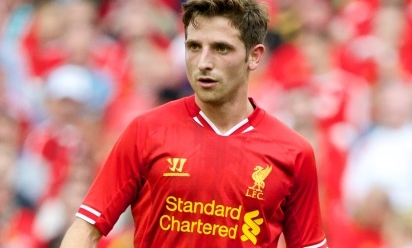 Reds midfielder Joe Allen will attempt to add an increased creative edge to his performances when he makes his return to the Liverpool first team from injury.

The Welshman is nearing a comeback to competitive action following a frustrating hamstring problem suffered against Notts County in the Capital One Cup back in August.

Both the manager, Brendan Rodgers, and the 23-year-old himself have earmarked Saturday's trip to Newcastle as a possible opportunity for Allen to be included once more.

Having regularly featured in an advanced midfield position during the club's pre-season preparations, our No.24 plans to build on that experience further at the front end of the pitch.

He told Liverpoolfc.com: "I can get involved more in the creative side, in assisting goals. That's a big thing.

"If I have the chance to play further forward, like I did in pre-season, goals are obviously another big one that I'd like to add a bit more to my game.

"I pride myself on that fact that I can play a couple of different roles, but that's a role I have played more naturally and played the most throughout my career.

"Pre-season went pretty well after a long lay-off with the shoulder operation. I'm looking to take off where pre-season started.

"I've been pretty open - last year didn't quite go as well as I would have hoped. There were certain games and moments where I did well; the key is to get that consistently.

"A lot of people have spoken to me, fellow players have said about moving to a different club for the first time. It is the first time I have experienced that.

"That's out of the way now, so hopefully I'm a year on and a year more experienced because of that."