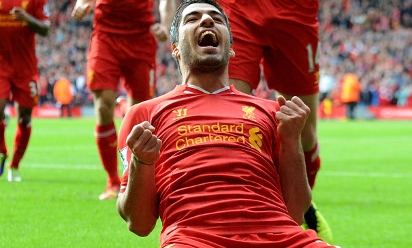 Dalglish: I'm very proud to be back

Liverpool put on a performance worthy of the watching King at Anfield on Saturday afternoon, comfortably beating Crystal Palace 3-1 to reclaim top spot in the Barclays Premier League.

Luis Suarez, Daniel Sturridge and Steven Gerrard each added their name to the scoresheet as Brendan Rodgers' side claimed a fifth victory in seven league matches - and with it climbed to the summit once more.

The pre-match team news revealed that Rodgers had made just a single change to his Liverpool line-up, and an enforced one at that, with Raheem Sterling replacing the suspended Lucas Leiva.

Meanwhile, one day after his return to the club as a non-executive director was announced by Fenway Sports Group and the club, Kenny Dalglish watched proudly from his brand new position at Anfield.

The Reds unleashed a first effort towards Julian Speroni between the Palace posts in the sixth minute; Suarez wriggled into space and set the ball back to Gerrard, who saw a first-time, sweeping attempt blocked by Damien Delaney.

Ian Holloway's team responded immediately and when Jason Puncheon was afforded the opportunity to scurry to the byline on the left, the wide-man accurately found the waiting Cameron Jerome in the penalty area - only for the No.30 to glance a header wide.

Victor Moses perhaps should have broken the deadlock in the 11th minute when found completely free in the Eagles' box but the Nigerian international's attempted flick did not quite come off. However, what happened during the next six minutes rendered the miss immaterial.

Firstly, Suarez combined with Jose Enrique to skip around the visiting defence and, despite pressure almost forcing the Uruguayan to fall over, maintained his balance to successfully guide a low drive into the bottom corner for 1-0 on 13 minutes.

Four minutes later, the lead was doubled. Sturridge, having worked Speroni moments earlier with a powerful blast at the near post, collected possession, danced beyond any forthcoming challenges and simply planted the ball into the far corner from a narrow angle on the left.

Palace produced a much-needed response and were unfortunate not to reduce their arrears twice in quick succession and were denied only by a mix of last-ditch Liverpool defending and sheer luck.

Initially, Jimmy Kebe raced in behind the Reds' backline and saw his clip goalwards beat Simon Mignolet only for Kolo Toure to recover and clear off the line; a subsequent Puncheon piledriver then deflected off Kebe, bringing a reflex, one-handed stop from our No.22.

Jerome then delivered a dangerous cross into the Liverpool six-yard box which, following a flick off Toure's outstretched leg, required an unorthodox but ultimately productive clearance by Mamadou Sakho.

Hopes of a comeback for Palace were destroyed eight minutes before the break, however, when the referee pointed to the spot as Sterling was tripped at full pace - Gerrard stepped up to calmly send the spot-kick into the left corner.

Moses diverted a Suarez centre onto the crossbar in unusual fashion and then the Liverpool No.7 tasked Speroni with another important stop, low to his left, before the half-time whistle finally offered Holloway's charges some respite.

For all that the first 45 minutes were increasingly frenetic, the opening 20 minutes of the second half lacked any encouraging rhythm, with a double substitution by Holloway at the break bringing fresh resolve to the away side.

When genuine action did return, a cross-shot by Sterling from the right flank tested Speroni's handling skills, another Puncheon blast looped off a Liverpool body and briefly worried Mignolet, and Dwight Gayle rifled a thunderous strike over.

Vice-captain Daniel Agger returned to duty following injury as a second-half substitute for Sakho, although the Danish defender could not prevent the visitors from registering on the scoresheet with 13 minutes remaining.

When Sterling was penalised and booked for a foul near the corner flag, Jose Campana whipped in a precise set-piece from the left which forward Gayle was perfectly positioned to glance into the far corner past Mignolet.

It would prove mere consolation for the Londoners, though, and it was the hosts who came closest to adding more goals - Sturridge smartly prodded a strike from the edge of the box onto the post. But the points were in the bag and the Reds rose to first place.