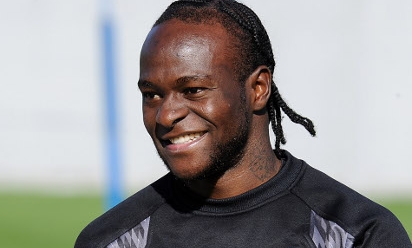 Victor Moses is determined to build on a promising start to his Anfield career by adding more assists and goals to his game as he continues to adapt to life on Merseyside.

The Nigerian international arrived at Anfield on the final day of the summer transfer window, joining the Reds on a year-long loan switch from Chelsea.

He's hoping his debut goal at the Liberty Stadium against Swansea will be the first of many in a red shirt - and the forward has spoken of his desire to contribute more in the assists stakes.

Moses told Liverpoolfc.com: "I'm very satisfied with my performances so far. It's a great club to play for and I just want to keep playing football.

"As long as I'm on the pitch, I just want to keep enjoying myself. The more games you play the more experience you get.

"I've just got to keep on playing and keep on helping the team out. I want to try and score more goals.

"I've played four games already and I want to create goals for my teammates and score myself."

The former Wigan man has had more than a month to settle into life at Melwood - and he insists it's been something of a smooth transition owing to the friendly atmosphere within the squad.

"I'm enjoying it. It's a great club and I'm enjoying every single day," said Moses. "Everyone has been great to me and I love it here. The history of the club is unbelievable and I'm just enjoying being here.

"We're doing really well. We're second in the league and we need to keep that going and keep winning games.

"Everyone has been friendly and we've been talking a lot. It was nice to see the lads and get on with them. Everyone has a great relationship and at the same time, out on the pitch, we're enjoying it.

"I talk to everyone and get on with all the players. I know Daniel Sturridge from my days at Chelsea and we've been talking a lot and doing things together."

Sturridge was in fine form as part of a Liverpool attacking triumvirate, including Luis Suarez and Moses, which pieced apart Sunderland at the Stadium of Light on Sunday.

Moses felt that despite long periods of Black Cats pressure, the Reds turned in an accomplished performance to push themselves back to second place in the Barclays Premier League table.

"We wanted to go to Sunderland and get the three points because we know the situation they are in at the moment," said Moses. "They'd just lost the manager and they were keen to impress the manager who is coming in.

"So we just wanted to try and get the three points. That's what we did. I thought we did it the right way. We worked hard from the start to the end. They came at us and when time wore on in the game."