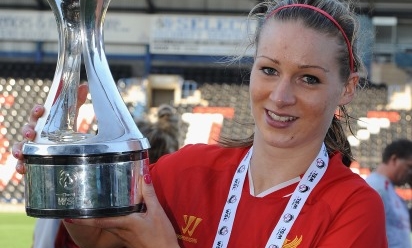 Following a major overhaul of the playing squad last summer, Matt Beard's side secured a maiden league title by overcoming Bristol Academy 2-0 on the final day of the season.

The Ladies won 12 of their 14 fixtures, firing 46 goals in the process to top the standings ahead of Bristol and Arsenal at the conclusion of a highly competitive campaign.

Explaining the foundations of their triumph, Bonner said: "There has been a lot of investment and support from the men's side.

"They have adopted a one-club philosophy and have really embraced us into that. It has helped us training-wise, we have improved as players and the contact time we have been able to have with each other. It has shown on the pitch.

"It puts a good structure in place and allows us to train more often and use the facilities. It has benefited us as players and we have improved throughout the season. The success has come on the pitch as well.

"It will take a few days to see the reality of it. It is a massive achievement for the club and a big step forward for women's football with the competitiveness of the league."