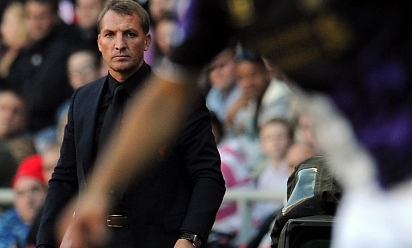 Suarez and Sturridge down Sunderland

After watching Daniel Sturridge and Luis Suarez pick apart Sunderland on Sunday, Liverpool boss Brendan Rodgers pondered whether there is a better strike partnership in the Barclays Premier League.

The duo scored all three goals between them as the Reds climbed to second in the division by claiming a 3-1 victory over the struggling Black Cats at the Stadium of Light this afternoon.

Sturridge was equally as clinical in creating chances as converting them during the 90 minutes - the No.15 set up each of his teammate's goals - and Rodgers was ebullient in his praise of the pair post-match.

"I'm not sure there's two better in the league, in all honesty," the Northern Irishman said at his press conference following the final whistle.

"We've changed the structure of our team a bit to allow us to pass it better - we've still got a lot of work to do - but also to fit in with the type of players that we have.

"Those two are right up there with the best in the country. You saw that today.

"For the [second] goal, Steven Gerrard makes an absolutely breath-taking pass and Daniel's touch, pace and power took him in. He showed the quality to roll the ball in for Luis to get his finish.

"Those two will only get better; you see the understanding. We have done a lot of work with them together in training. They looked very bright today.

"They are two different types as well, which makes it hard for defenders because one has pace, power and two good feet. The other is a wriggler and can shift his body very quickly to end up in the box. The dynamic of them is very good.

"They have worked a lot in training - it's not just something that has been dropped in. We looked at 3-4-1-2 towards the end of last season.

"We did some work on it, looking at Luis coming back, and they have struck up a very good partnership.

"You saw from today - they want what's best for the team. Goalscorers want to score goals and they are judged by how many goals they score and how many assists they make.

"What we ask them to do is make sure that they can be their individual but none of them are bigger than the group and the team.

"You saw that today - Daniel got one and set up two. Towards the end, the counter-attack, Luis played in Daniel and got in the box to get the return pass.

"Both of them have the hunger to score goals but what's more important is that if one of them can't score, they set up the other one. That's what they have done."

Suarez was making his return to Premier League football against the Mackems, after featuring in the Capital One Cup earlier this week, and marked his comeback with a double salvo.

Rodgers added: "He's not fazed by much. He has a remarkable mentality - his determination and the steel in his mind-set is phenomenal. He is just so focused.

"For us, he is like a new signing coming back into the team. It's great for the team and the supporters.

"Our supporters deserve to see someone of that quality and his talent deserves to be out on the field rather than sat in the stands. That's something we're working very hard to make sure happens this season.

"He hasn't been cocooned out of the way and then come into football. When he was not working in training, I gave him the opportunity to go back to Uruguay for a bit.

"He is someone who loves football and I knew how much it was hurting for him not to be playing. But he wanted to stay, he wanted to work - he did lots of extra sessions, finishing sessions and conditioning sessions.

"He knew that when he came back he wanted to be up to speed. You're never going to be totally up to speed but it would be very hard for anyone to say that today he wasn't very good.

"That's a great credit to him and also our conditioning team that have put him through the paces."

Switching his focus to Sturridge, who has now found the net seven times in 2013-14 and 18 times in 24 matches since joining Liverpool, the boss described the Englishman as 'phenomenal'. 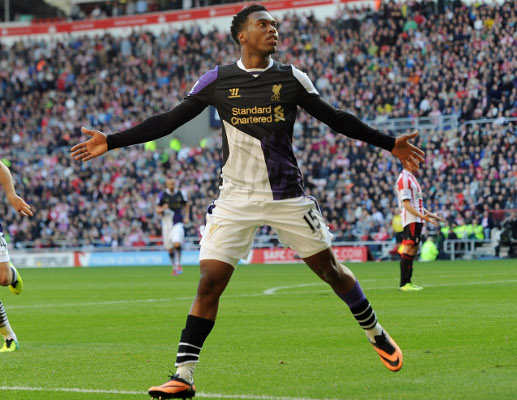 "All Daniel needed was an opportunity to play, he needed confidence like any player," he said.

"When he played at Chelsea, he was coming in and had to really make an impact. The only way he felt he could maybe make an impact was to get goals.

"We have done a lot of work on his game. He's not an out-and-out No.9, he's a player that can play and move, drop in short and go behind. He understands that I will allow his talent to flourish.

Today's result lifted Rodgers' charges up to second place in the standings, two points behind Arsenal, following a run of three games without a win in all competitions.

"Defensively we were solid today as well," the manager continued.

"We limited Sunderland to shots from outside the box, we were never really under pressure inside the box. It was a really good team performance today.

"I was delighted with the result. We had a really good performance but didn't get anything during the week at Old Trafford.

"So to come away, get the result and perform, in parts of the game, like we did was very pleasing.

"Kevin Ball had a reaction from his team, he has obviously only been in charge of them for a short period of time but you could see the intensity and the focus they had.

"We always had to be alert; we defended very well and on the counter-attack looked very threatening. It was a very good victory for us."

A final question to the manager did not involve the Reds' first team at all; rather a journalist asked the 40-year-old for his reaction to Liverpool Ladies' Women's Super League triumph on Sunday.

"I've been involved in their story from pre-season; we had them in training with us over pre-season," he concluded.

"It's big congratulations to them. Arsenal, for as long as I can remember, were the team that dominated women's football for many years.

"For them to go on and win the league is a great credit to them and the hard work they have put in. Hopefully they have a good night and a good couple of days. It's brilliant for them."

Watch Liverpool in style at Anfield this season by taking advantage of our range of hospitality packages.