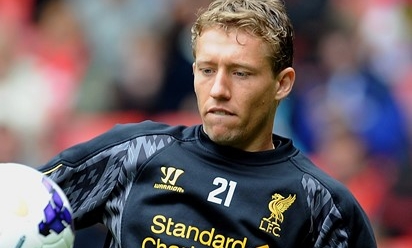 Lucas Leiva is determined to put the pain of defeat at Old Trafford firmly behind him by helping Liverpool to three points against Sunderland on Sunday.

The Brazilian looked on as Javier Hernandez's volley sent the Reds crashing out of the Capital One Cup in the third-round against Manchester United on Wednesday night.

However, Lucas believes the visitors' display at the home of their fierce rivals was one of their finest in recent years.

Now he wants to take the small positives which have emerged from the 1-0 loss into tomorrow's Barclays Premier League clash at the Stadium of Light.

"I think it's always disappointing when we lose - especially when it puts us out of the cup," Lucas told Liverpoolfc.com.

"It was a competition that we really wanted to get to the next round of and challenge for.

"But I think we had a lot of positives to take. In the end, it's only the result that matters, but if you watch the game, it was probably one of the best performances at Old Trafford in the last few years from us.

"Unfortunately we conceded a bad goal. We would like to have won the game, but now it's down to us to respond in the right way for the next game in the Premier League.

"Sunderland is a big game for us after two defeats and the game against Southampton. We lost at home and we didn't perform well. We have to get those three points back and get back on track.

"We know how difficult the Premier League is and we have to make sure that we get points away from home as well. Out of the last six points in the league, we have only picked up one, so it's important to win.

"Sunderland are fighting to get back into winning ways as well, so it will be an interesting game for both sides and I hope we can win and get the three points. We want to get back towards the top of the table again."

During the defeat to Manchester United, Brendan Rodgers opted to deploy a new tactic, which saw the Reds line up with three centre-backs and two advancing wing-backs.

Lucas was impressed with the manner in which the formation was implemented, and he's confident the side can revert to a similar shape should they need to in the future.

"I think it worked really well," said the 26-year-old. "Manchester United had more chances from shooting outside the box, instead of playing through our defence and midfield.

"If we have more time to work on that, we will get better and the understanding between the players will improve.

"I think we got into their penalty area a lot and that means we could have scored a goal on the night. Unfortunately we didn't, but I think that for the next game, Luis is coming back and it will be his second game.

"He will be fresh and feeling better and the players that we have up front will give us the option to create chances. If we can be more clinical, the chance to score goals will be higher.

"We have to move on and we have a big, big game for us now against Sunderland on Sunday."