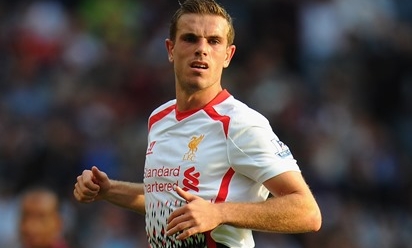 Lucas Leiva has no doubts that Jordan Henderson will continue to progress as a Liverpool player – because the Brazilian sees shades of his former self in his teammate.

Henderson is set to make his 100th appearance for the Reds today, against the club he left for Merseyside three seasons ago, Sunderland.

The 23-year-old has played every single league minute of 2013-14 so far, building on an impressive finish to the previous campaign.

Lucas has backed the midfielder to go from strength to strength. He told Liverpoolfc.com: "Jordan is a player who is growing and improving all the time.

"At the beginning of last season, he didn't play so many games, but when he played afterwards, he helped a lot and his work-rate is outstanding.

"I'm so happy for him to achieve 100 games for Liverpool because he had more or less the same start as me here.

"We can see that he is an important member of the team. He can play in a lot of positions and he always does what the manager wants and that makes him a very important player for us.

"We just hope that he keeps improving because he's still young and he still wants to improve his game and get better all the time."

Henderson will return to the home of his former club for the third time as a Liverpool player today, as the Reds look to pick up a second away win of the season on the road.

The Black Cats are without a full-time boss following Paolo Di Canio's recent departure and the appointment of caretaker manager, Kevin Ball.

"When you change a manager, the players really want to impress the manager that is coming," explained Lucas. "So I think there are two sides to it.

"It's not so good for the team, because they have just lost their manager, but on the other hand they have a new boss coming.

"All the players start from zero to impress the new manager and I think we just have to worry about ourselves and to make sure we play well.

"If we do that, our chances of winning will be high and we'll see if we can get the three points. That would be perfect for us."