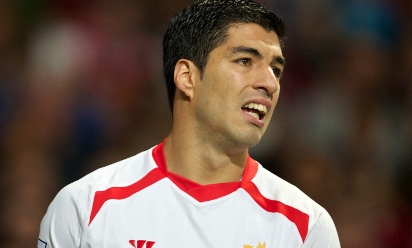 Javier Hernandez's second-half strike eliminated Liverpool from the Capital One Cup after their third-round clash with Manchester United at Old Trafford ended in a 1-0 defeat.

In an encounter where Brendan Rodgers' side dominated most of the proceedings, the Reds were unfortunate to be undone by the Mexican from a corner inside the first minute that followed the restart.

Liverpool's lion-share of the game's closest attempts was epitomised by deflected shots from Luis Suarez and Jordan Henderson that rattled the woodwork on an evening where the Reds were unlucky not to find the net.

United poured forward immediately after the first whistle in a bid to make home advantage count.

Nani found the space for a 20-yard drive that took a wicked deflection and changed course dramatically; fortunately, the ball failed to trouble Simon Mignolet's goal as it fizzed well wide.

The Reds refused to allow the hosts to dominate as they fought back admirably and fashioned the clearer chances in the first half an hour.

A swift passing exchange between Suarez and Daniel Sturridge released the latter, who surged towards goal before prodding narrowly wide under pressure from the edge of the area.

Shortly after, Suarez expertly controlled a long pass towards the back post by touching it past Jonny Evans before being prevented by David De Gea racing out to smother the ball.

It became clear that Liverpool were in the ascendancy as the half progressed as they restricted United to very little joy in the final third. However, the Reds were finding themselves thwarted by the Red Devils' backline, with Chris Smalling proving to be a tough figure to bypass as the half drew to a close.

After finding themselves on the back foot for a large portion of the opening half, United responded by taking the lead inside the first minute after the restart, courtesy of Hernandez. The Mexican found space in the box to glance in Wayne Rooney's corner with the use of his shin.

Liverpool fought back in the desired manner and almost reaped the reward of an equaliser through Henderson.

Sturridge attempted to return Suarez's initial pass with a deft flick back into his path before Evans' efforts in clearing the danger saw the ball roll into Henderson's path. The midfielder preferred precision over power as he side-footed a low shot, but his effort was poorly directed as it rolled well wide.

With little over 25 minutes remaining, Shinji Kagawa's solo effort nearly doubled United's tally. The 24-year-old charged through the centre of midfield before drilling a powerful shot over the outstretched arm of Mignolet and onto the top of the crossbar.

As Liverpool pressed for the levelling goal, several attempts in quick succession ensured the Reds came agonisingly close to bringing themselves back on terms.

Suarez met a corner on the edge of the area and remained calm as he ghosted past a challenge before slamming into the side-netting.

Victor Moses' diving header from Jose Enrique's volleyed cross flew straight at De Gea, an attempt that preceded an effort from Suarez that was the closest of the trio.

The Uruguayan assumed set-piece duties when the Reds won a free-kick left of the area. Suarez curled a typically dangerous shot that deflected on its way over the wall as the ball soared and crashed off the crossbar.

The visitors' valiant efforts to find an equaliser were nearly completely undone by Rooney on two occasions with less than a quarter of an hour left.

The forward's whipped free-kick was pushed out wide by Mignolet before his 20-yard curling effort from the resulting corner was also denied by the Belgian custodian.

In the closing moments of the match, Henderson received a short corner and whipped a shot towards the near post that deflected and took De Gea by surprise as it smacked against the goalframe.

Shortly after, Suarez found space in behind the Red Devils' rearguard to roll the ball across to Kolo Toure, whose side-footed attempt was dragged off-target - ensuring United progressed into the next round of the competition.