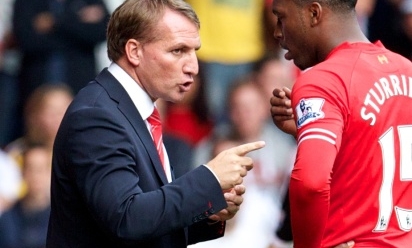 'We can put things right on Wednesday'

Brendan Rodgers accepted that his Liverpool team were far short of their best form on Saturday but is already targeting a similar run to the one which saw the Reds top the Barclays Premier League table.

After kicking off the 2013-14 season with three consecutive victories, followed by a 2-2 draw at Swansea last Monday, Rodgers' side were downed 1-0 by Southampton at Anfield on Saturday.

A second-half header from Dejan Lovren handed the Saints three points and brought a conclusion to the Reds' unbeaten and impressive opening to the campaign - their first defeat since losing to the same opponents in March.

"We were nowhere near our level - the result was a big disappointment for us and equally the performance," the manager explained to Liverpoolfc.com after the match.

"We haven't had many days like that since the turn of the year; obviously the last time we lost was against Southampton.

"We just never got going, we were very flat and technically we were a way short of the level we have been at for a long time. So it's disappointing to lose.

"But we'll put it behind us, we'll analyse the game, reflect on it, and hopefully we'll recover well now and look to go on another run."

With Jose Enrique carrying an injury and Glen Johnson on the sidelines, the Northern Irishman opted to utilise Mamadou Sakho and Kolo Toure in the full-back berths.

On the injuries affecting his defensive options, the boss reflected: "It hasn't helped; we had a regular back four really.

"The players that have come in and been asked to do a job in those full-back positions, Kolo and Mamadou, did very well.

"We've obviously got Glen Johnson out injured, we've got Jose Enrique that we're nursing through an injury that he has, and we've got Aly Cissokho out injured.

"I needed to be careful because if we lose Jose that would disrupt us. It certainly doesn't help the fluency in how we play.

"But still, we've got accomplished players and we had four players on the field that are centre-halves and we conceded from a corner. So that's a disappointment."

The first task on Rodgers' agenda now is to raise spirits within the dressing room ahead of a mouth-watering Capital One Cup clash with Manchester United at Old Trafford on Wednesday.

"That's part and parcel of it, you've got to do that. We've got a big game now in the cup," he said.

"For 24 hours, it's always difficult - the players are hurting. We've grown in the last six or seven months and this is the first defeat in a long time.

"It's important now that we come together and look to improve on today, because the performance was nowhere near what we expect here - particularly at Anfield - and ensure that we go in with real optimism into our next games."