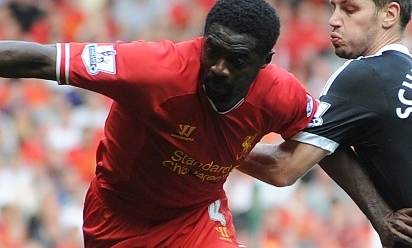 Dowie on target for England

Within minutes of leaving the pitch on Saturday, there was only one question on Kolo Toure's mind: How do we recover from this setback?

The Ivorian defender was in the Liverpool XI as Southampton recorded an unexpected 1-0 victory over the Reds in the Barclays Premier League at Anfield yesterday.

A header from Saints defender Dejan Lovren on 53 minutes was enough to end Liverpool's unbeaten record in the division - but Toure is confident of an immediate response from his colleagues.

He told Liverpoolfc.com post-match: "It's a marathon - the season is very long and we're going to have ups and downs.

"We all know that as a team we didn't perform; it wasn't one or two, it was the squad. We didn't work as a team like we are used to.

"We need to get back to those basics, because that's what our strength is - as a team we are really strong.

"We didn't start the game very well as a team - we couldn't pass the ball or move really. I don't know why, but the performance wasn't good from the whole squad.

"The most important thing is: how are we going to react to a setback like that? I'm sure the team is really strong mentally. Even 1-0 down, we were pushing, we saw the team were trying to come back.

"We didn't have a chance to score the goal to make a draw. But the next game is going to be very important for us and we will do everything we can to win the game."

Despite fielding four players across the backline who generally operate as powerful central defenders, the goal Liverpool conceded derived from a corner into the penalty area.

"It's always difficult to concede from set-pieces, definitely," said a typically honest Toure.

"But we have been defending very well. Today they scored from a set-piece; in the Premier League, we know every free-kick and corner is a goal opportunity.

"We didn't defend very well on that part of the game, and we will work on that. We'll analyse the game, see what we can do better, what we need to improve, and get ready for the next game."

That next game represents a trip to Old Trafford on Wednesday evening, to challenge Manchester United in the third round of the Capital One Cup.

Our No.4 added: "It's very important, every game is really important for us.

"We're going to play the game like it's a cup final. Every game, that's what we want to do; play every game as 100 per cent as we can and try to win.

"It's a tough game and we know it's going to be a good challenge. I'm really happy that game is coming because we will show a reaction and how strong we are mentally."

Luis Suarez will be available for selection from Wednesday after completing his 10-game suspension, and Toure expects the Uruguayan to help further improve the Reds.

"He's a big player for us," the defender said. "We all love him and he's going to be back, which is really good for us. But we have good players who have been doing a great job as well.

"The strength in Liverpool now is the squad, the team - as a group we are really strong. We have another power coming, Luis Suarez, and he is welcome.

"We are really happy; we know that he is going to help us improve the team again."