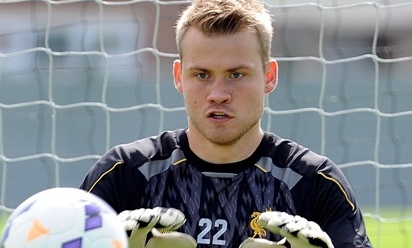 'Kolo and I have a French connection'

Liverpool goalkeeping coach John Achterberg has set Simon Mignolet a target for the 2013-14 campaign – but the Dutchman will only reveal more at the conclusion of the season.

After joining the Reds during the summer, the Belgian has taken the mantle as the club's first-choice stopper and has yet to be beaten in three Barclays Premier League fixtures.

Quizzed on whether Mignolet has been handed an objective for the season with regards to clean sheets or goals conceded, Achterberg warned that fans will have to wait a little longer to find out.

"I've set a target myself for him, but I don't want to put him under pressure on that," he told Liverpoolfc.com.

"When you come to the club, you want to focus on doing well and doing the right things without being under extra pressure. I'll let you know at the end of the season if he reached the target I have put down.

"Simon has actually got off to a really good start to be fair to him. Obviously keeping three clean sheets and keeping clean sheets in most of pre-season, apart from the Celtic game, there's not much he can complain about.

"I see a lot of good stuff in training, so you hope that it all goes well. He has shown his qualities from training in the games, which is good.

"Saves will always give you confidence in the game. If your first movement goes well, normally you get in a rhythm. He has good focus; I believe there will be no problem for him to be consistent and play well."

Last season, skipper Steven Gerrard explained how the analysis of penalty kicks carried out by Achterberg and his colleagues aided his winning goal from the spot against Tottenham in March.

So did they play a similar role in Mignolet's memorable save from 12 yards to deny Stoke on the opening day of the new season?

He said: "Steven still needs to put them under pressure in the goal so all the credit goes to him.

"With the analysis department, we provide the information. The goalkeepers have a meeting one or two days before the game where we look at all those kinds of things and give the information.

"He needed to make a good decision to make that save; for him, it was a great moment to start off - from a possible draw to win the game, what we deserved.

"It gives the whole team and everyone else a boost to progress."

The 25-year-old has provided plenty of evidence of his shot-stopping prowess in his four games for Liverpool so far, although Achterberg has also pointed to Mignolet's all-round ability.

The coach added: "Simon is an all-rounder really - he hasn't many weak points to be honest.

"He can play with his feet, his positioning is good, he comes for crosses and I think probably his best is shot-stopping. He has good power and speed to get to the ball.

"We talk about small tactical things in terms of what players do in the box and what he can do to help himself to improve; some small positional things which make him even harder to be beaten. But he has been doing well and he is really focused.

"Everyone has his own identity. For me, he is a type like Edwin van der Sar in terms of his movement, and he is calm and focused.

"Comparing with Liverpool goalkeepers is difficult; there have been some great goalkeepers in the past. He has just come in to try to establish himself as one of them as well."