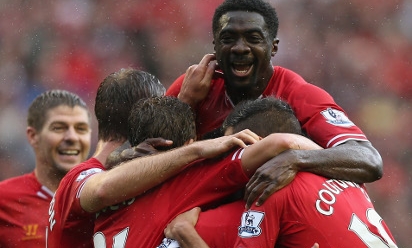 Kolo Toure believes Liverpool already possess one of the most important hallmarks of a successful team – an indomitable team spirit.

The Reds have made a 100 per cent start to 2013-14, winning all three of their Barclays Premier League games without conceding a goal to go top of the table.

Having been an integral part of trophy-winning teams at Arsenal and Manchester City, Toure is well aware of the impact a close-knit dressing room can have on a team's fortunes.

"If you want to be successful, you need to work as a team. That is really, really important because we are a group of players and we have the same target - to win trophies and do as well as we can.

"When you don't play, you need to support the team and your teammates need to feel that you are behind them fully."

The camaraderie in Liverpool's dressing room was perfectly illustrated by Toure himself recently.

Despite missing the 1-0 victory over Manchester United due to injury, the Ivorian made his way to the touchline at full-time to congratulate each of his victorious teammates as they left the pitch.

Toure reflected: "The lads played a great game. I was off the pitch and really wanted to help them, but I couldn't.

"Skrtel had a fantastic game and we worked as a team really, really well. That is great for the team spirit of the group."

That win over United was the only game Toure has missed since joining Liverpool from Manchester City in the summer.

However, he admits he kicked every ball with his teammates from the directors' box as he watched Daniel Sturridge's first-half goal send the Reds to the league summit.

"It was hard - it's hard when you don't help your teammates to play games," he reflected. "United was a big game, but at the end of the day we won the game.

"That calmed me down because I saw the team played very well, dominated and controlled the game very well. When you can't play but still see your team win, that helps you to become calmer."

Liverpool are the only top-flight team to have taken maximum points from all of their games so far this season.

Toure, though, insists he isn't surprised by the Reds' start.

"[Looking at the table] motivates us to do more," he said. "I'm not surprised because of the effort we put in during pre-season and the commitment of the players every day in training.

"We've been working so hard and everybody is really focused - the young players and the experienced players.

"The manager is doing a great job, all the staff are working really hard. We need to carry on doing that and the results will come."