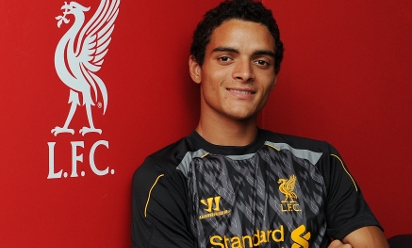 Joao Carlos Teixeira has welcomed the addition of his friend Tiago Ilori to Liverpool and insists he will be an exciting capture for the future.

Following his arrival on transfer deadline day from Sporting Lisbon, Ilori has been reunited with former teammate Teixeira, both of whom played key roles in a win over Liverpool in the NextGen Series in 2011.

Teixeira is delighted to team up with the promising centre-half again and has promised to help him settle in to life on Merseyside.

"Tiago is really happy to be here," Teixeira told Liverpoolfc.com. "I have already spoken with him and he's going to enjoy it here.

"He is a really fast player for a centre-back, is tall and he will get stronger and improve here.

"I will show him the city and help him settle quickly."

Teixeria celebrated his first game of the season with a fantastic free-kick as he helped Alex Inglethorpe's U21s to a 1-1 draw at Leicester City on Monday night.

The Portugal youth international now hopes to push on and continue his development with Liverpool.

He added: "I was really happy to score and help the team. I saw the goalkeeper's position, tried to beat him and fortunately managed to score.

"I missed the first game because I was with the first team in a friendly and then missed the Manchester United game due to injury, so it was good for me to play the 90 minutes.

"Always when you get the chance to impress Brendan Rodgers and play with the first team it's important you do well and always give your best."