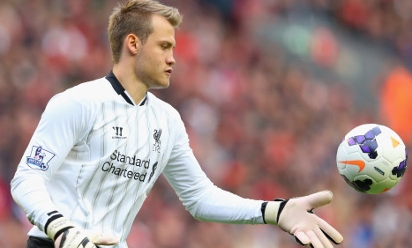 Simon Mignolet may be taking all the plaudits for making an unblemished start to his Liverpool career - but the stopper insists he has his defenders to thank for three consecutive league shut-outs.

The Belgian, who arrived from Sunderland at the start of the summer, has made crucial saves in each of the Reds' league victories so far.

Stoke, Aston Villa and now Manchester United have all failed to put the ball in the back of his net - and it's a record Mignolet hopes will continue long into the season.

"The first three games have gone well," he told Liverpoolfc.com. "We've managed to keep clean-sheets, but that doesn't mean it's been all about the goalkeeper by himself.

"We do it as a team and everybody works for each other. If we can do that in the future, then we have a very good team.

"We can win every single game, like you saw against Manchester United. We didn't give many chances away and if we can do that in the future, we'll win games.

"We started the game very well and got the early goal. After that, everybody had to work hard and work together to keep a clean-sheet again. That's what we did."

Three consecutive victories mean Brendan Rodgers' side will sit top of the Barclays Premier League table for the duration of the international break.

The message from Mignolet for when play resumes in two weeks' time with an away clash against Swansea is: don't let the intensity drop.

"Everybody needs to keep that same amount of focus in the upcoming games," said the 'keeper. "Let's keep it going and do the same things in the same way.

"There's only been three games played, so we don't have to look too far ahead, we need to take each game as it comes.

"Everyone is doing their jobs very well at the moment, so hopefully we can keep it that way and do the same thing in the next couple of games."