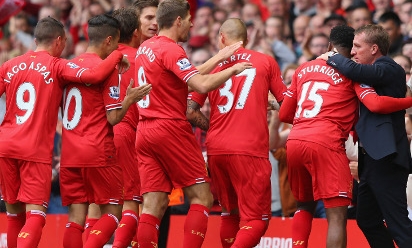 The forward's goal - on his 24th birthday - maintained Brendan Rodgers' side's impressive 100 per cent record in the 2013-14 campaign.

Liverpool's win proved to be the perfect occasion to mark the 100th anniversary of Kop legend Bill Shankly's birth.

The match provided the pulsating start that the day deserved as Sturridge became only the second player ever to score for the Reds in the opening three matches of the Premier League season.

The forward instinctively glanced in Daniel Agger's header from a corner in the third minute, causing an already vociferous Anfield atmosphere to erupt.

Sturridge's header proved to be the catalyst for a flurry of attempts at both ends of the pitch as the rapid tempo of the encounter grew.

Robin van Persie improvised with an acrobatic overhead kick after Patrice Evra nodded across the face of goal before Philippe Coutinho dragged a 25-yard effort wide immediately after.

Danny Welbeck failed to trouble the Liverpool goal with an attempt fired straight at Simon Mignolet but the Reds avoided much more of a scare minutes later.

An Ashley Young corner drew no contact in the six-yard box and took the well-placed van Persie by surprise at the back post; the Dutchman failed to control and finish as the ball fortunately bounced away to safety.

As the half progressed, the match developed into a much more intense encounter with United becoming increasingly aggressive as frustration crept in for the visitors.

Just over five minutes into the second period, United threatened to level the scoring when Liverpool cleared a corner only as far as Young on the edge of the box. The winger rifled a half-volley towards goal but was foiled by a block from Glen Johnson.

With little over 20 minutes remaining, Ryan Giggs came close to bringing David Moyes' side on terms. The Welshman met substitute Nani's corner with a glancing header that the lively Mignolet was equal to with a comfortable catch.

The Belgian custodian was called upon courtesy of Nani yet again when the Portuguese winger skipped inside from the right flank before slamming a powerful drive, forcing Mignolet to dive across and palm away the danger.

In the latter stages of the fierce clash, van Persie nearly stole a point for the Red Devils in dramatic circumstances.

Substitute Javier Hernandez slipped his fellow striker through but van Persie failed to wrap his boot around the ball as he slid his attempt into the side netting at the near post.

Liverpool nearly found the net in the closing moments of the game when Raheem Sterling came agonisingly close to finding the top corner but was thwarted by David De Gea.

That was the last meaningful action of the encounter as the Reds held on for a memorable three points.