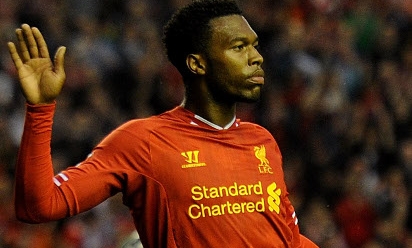 Dramatic extra-time strikes from Daniel Sturridge and Jordan Henderson sealed Liverpool's 4-2 victory over Notts County in the second round of the Capital One Cup at Anfield.

Early drives from Raheem Sterling and Sturridge were cancelled out by the League One outfit, with second-half goals from Yoann Arquin and substitute Adam Coombes ensuring the tie progressed into extra time.

Despite being reduced to 10 men through an injury to Kolo Toure, goals in quick succession from Sturridge and Henderson cleared a safe passage into the next stage of the competition for the Reds.

Aly Cissokho and Luis Alberto made their competitive bows for Brendan Rodgers' side, although the French defender's night was drawn to a close early due to an injury in the 10th minute.

Liverpool looked to stamp authority immediately and Sterling epitomised that with an impressive solo goal inside the first four minutes.

The winger charged through the centre of midfield past multiple defenders before drilling a powerful shot underneath the arm of Bartosz Bialkowski and into the corner of the net.

Unfortunately for Cissokho, the full-back's first Reds start was ended prematurely as he was forced off through injury and replaced by Daniel Agger.

The Dane's first contribution of the encounter was to come agonisingly close to doubling Liverpool's tally. The centre-back met Steven Gerrard's whipped free-kick with a glancing header that rattled off the far post.

Sturridge curled narrowly wide after Joe Allen skipped past several challenges before the former's aiming was much more deadly as the half-hour mark approached.

Gerrard slid a typically incisive pass through to Sturridge before the forward calmly controlled the ball and sent it soaring into the far corner with a rifled shot to maintain his 100 per cent goalscoring record in competitive games this season.

Despite building a comfortable lead, the Reds admirably continued to press for a third goal and were nearly rewarded for their efforts courtesy of Agger yet again.

The 28-year-old displayed his aerial prowess for a second time in the match when he rose to nod a solid header destined for the roof of the net but was thwarted by the palm of the diving Bialkowski.

With five minutes remaining in a half where Liverpool thoroughly impressed, Gerrard nearly made the Reds' dominance count with an attempt that had the Magpies' woodwork shaking again.

After being released by a perfectly weighted pass from Sterling, the Kop skipper slammed a shot against the near post from an acute angle as Liverpool closed out a promising opening 45 minutes.

The second half brought a slightly more reserved approach from the Reds as they focused their energy on consolidating their lead as opposed to pouring forward constantly.

Unfortunately, the Belgian custodian was powerless to prevent Chris Kiwomya's side minutes later when they halved the deficit through a well-worked free-kick.

Manny Smith nodded the floated set-piece back across the face of goal, allowing the onrushing Arquin to nod past Mignolet from six yards.

As the Reds began to reassert themselves in the fixture, they were unlucky to be foiled by the goalframe on a third occasion as Kolo Toure came painfully close to netting his first competitive Reds goal.

A pinpoint curling Gerrard cross was met with a half-volley from the Ivorian that rendered Bialkowski helpless to prevent it - but the fizzing effort ricocheted away as the Reds looked to re-establish their two-goal cushion.

As the tie neared an end, Liverpool were stung by the away side as the Reds looked increasingly likely to close out the game.

Arquin surged in behind the backline before his hopeful cross was met by the composed substitute Coombes, who neatly tucked the ball into the net at the back post.

As the prospect of extra time loomed, Agger drilled a loose ball from 25 yards that took a harsh deflection but flew narrowly off-target, before a well-placed Sterling sliced Glen Johnson's cross wide of the post.

Soon after an extra half-hour commencing, Toure was next to fall victim to injury after Liverpool had already unexpectedly lost Cissokho and Allen earlier in the match.

Having already made three substitutions throughout the tie, the Reds were forced to continue with 10 men.

Despite that disadvantage, the heroic Sturridge emphatically sent his side back into the lead in the closing moments of the first period of extra time.

A rapid counter-attack resulted in substitute Philippe Coutinho finding the energetic striker in space further up the field. Sturridge drilled a low shot from a tight angle that Bialkowski's outstretched arm could only slow the momentum of as the ball trickled over the line.

After replacing the injured Allen, Henderson made a stunning impact five minutes into the second period of extra time. The midfielder nutmegged Magpies captain Gary Liddle before calmly side-footing into the corner to confirm the deserved win.