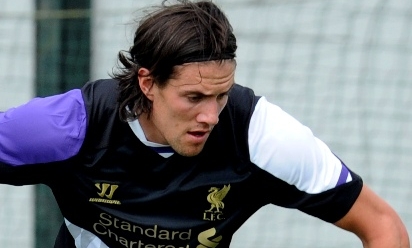 Brendan Rodgers has admitted that Liverpool defender Martin Kelly is still 'some way off' the required level of fitness to be available for selection for the first team.

Ahead of this evening's Capital One Cup encounter with Notts County, the manager discussed a number of issues in an exclusive interview now available in full for LFCTV Online subscribers.

In addition to Kelly's fitness update, the Northern Irishman outlined his preparations for the meeting with the League One outfit and revealed how Daniel Agger is adapting to his new role of vice-captain.

Kelly skippered the Reds' U21s team to an impressive 4-2 victory at Manchester United last Monday as he continues his recovery from a serious long-term injury.

Rodgers explained that the defender will not be considered for selection against County, however, as both the player and the manager are aware of the necessity for patience in his comeback.

"Martin won't be involved - he's still quite some way off match fitness really," said the boss.

"Credit to him, he's working ever so hard and that will be frustrating for him. He felt himself after those early weeks coming back into games that he was a long way off where he was the year before.

"That's just going to take time, there's no quick fix. If you have been out for a year it sometimes takes you near enough that to be back to your best.

"The most important thing for us is to nurture him back through his fitness and his match fitness. We have a behind-closed-doors game here on Wednesday that he will play in to help his fitness."