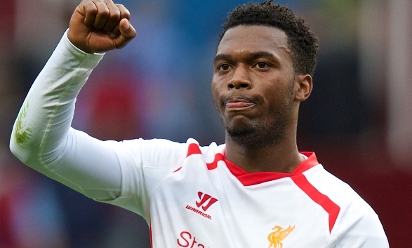 BR: We can't always be Globetrotters!

Daniel Sturridge believes the team ethic Brendan Rodgers has instilled in his team is behind Liverpool's superb start to the season.

Sturridge scored the only goal for the second game running as Aston Villa were defeated in the Midlands.

The 1-0 scoreline puts Liverpool joint top with Chelsea at this early stage of the campaign.

Sturridge said: "I think we deserved it. They played some good football in the second half and put us under a lot of pressure but we were resilient and worked hard as a team, and that's the manager's philosophy - to be a team.

"I just want to win - it doesn't matter if I score or not. I work every day, I work very hard with the team.

"We defend as a team. If I have to be in the full-back position, so be it. It's all about winning games, and we're all delighted."

Sturridge now has 13 goals in 18 games since signing from Chelsea in January - and in his post-match interview at Villa Park he was asked what was behind his fine form.

"I'm just playing my normal game, to be honest," he said. "I've probably matured a little bit with my confidence with being in the first team.

"I've not played as a centre-forward as much as I would have liked to in the past but this is how I have been as a kid - and now I'm being given an opportunity to do it in a first-team environment."

Sturridge was also pressed on whether he was aiming to make England's squad for the World Cup in Brazil next summer.

"I want to make the England team for the World Cup - it's every player's dream to play in a World Cup," he said. "It's something I'd love to do."

Away from his goal, Sturridge was involved in one of the game's other talking points - a penalty claim after a clumsy challenge from Villa goalkeeper Brad Guzan.

Our No.15 said: "I thought it was a penalty but you guys have seen the replays and I'm not too sure. I'm not going to cause any grief about it. We won the game.

"The referee is there to do a job - if he thinks it's not the right decision then fair play."