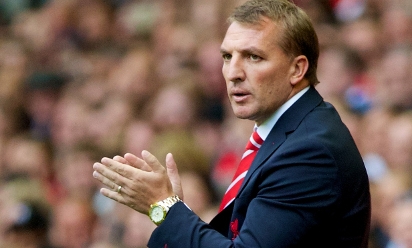 'I can't score goals, so it was great'

Liverpool boss Brendan Rodgers sensed a different feeling in the Reds dressing room ahead of the Barclays Premier League opener against Stoke in comparison to last season.

Rodgers' team kicked off 2012-13 with a 3-0 defeat at West Brom 12 months ago, but were a changed outfit in beating Mark Hughes' side 1-0 with a performance which deserved more goals.

While aware that feet must remain firmly planted on the ground, the boss revealed there is a special mood of togetherness within the squad he has built.

"I remember last year and people saying to me 'should we be losing 3-0 to West Brom?' They were absolutely right," said Rodgers.

"But we've got better and better as we've gone on. It's a big job here.

"But I just got the feeling in the dressing room beforehand, when the players were getting together, some of our staff were saying that it just feels different this year.

"There's a camaraderie and a togetherness there. Long may it continue.

"We haven't won the World Cup, it's a game of football. But the lads are happy, they've done their job. They knew this was a big three points."

Simon Mignolet and Daniel Sturridge were the match-winners at Anfield with a penalty save and the decisive goal respectively - and Rodgers paid a glowing tribute to the latter for his work ethic.

The Northern Irishman added: "I think the biggest credit you can give him is that in all the time he was off, he never put on any weight whatsoever.

"His body fat remained the same as when he was playing, which shows you how hard he was working.

"And I have to give credit to the medical team, because they've got to make sacrifices as well. Daniel was keen to get himself right, so he was ready to fire at the beginning of the season.

"For a bit of time it was touch and go, but once we saw his progress and how he was working, he was back probably three weeks earlier than what we anticipated, purely because of his attitude.

"I always believe he's got a goal in him. That's why we took him here. As long as he's on the field, he can end up being one of the top goalscorers in this league."