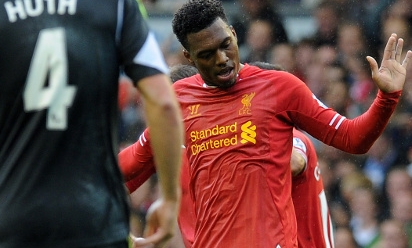 The forward's goal emphasised how much Brendan Rodgers' side dominated in a match where the Reds hit the woodwork on three occasions.

A heroic Simon Mignolet secured all three points for Liverpool with a penalty save to deny Jonathan Walters in the dying moments of the encounter.

The excitement surrounding the first game of the season was epitomised by a pulsating quarter of an hour that involved the woodwork being rattled twice and the Reds being foiled by the linesman.

Mignolet struggled to properly parry away a cross and Robert Huth failed to hit the target with a rebounding volley that he lashed against the crossbar.

This proved to be the catalyst for Liverpool exercising their dominance and they thought their efforts had paid dividends through Sturridge.

The forward glanced Gerrard's free-kick into the far corner but celebrations were short-lived as he was judged to have been offside.

That didn't dampen the Reds' spirit as they stepped up their search to break the deadlock. Kolo Toure sent a powerful header crashing off the crossbar before Sturridge's follow-up attempt from an acute angle was driven high and wide.

Asmir Begovic was then required to make a series of saves to deny a number of one-on-one opportunities.

After Iago Aspas prodded straight at the Bosnian, the striker played an accurate passing exchange with Jose Enrique that saw the latter hit a low shot from close range that was blocked by the Stoke custodian.

Philippe Coutinho's renowned eye for a deadly pass was evident again as he slid the ball through to Jordan Henderson but Begovic swiftly reacted and rushed out to prevent the midfielder's left-footed strike.

The visitors' goalkeeper was powerless to stop Sturridge, however, as quick interplay through midfield allowed the 23-year-old to drill an unstoppable 25-yard drive beyond the outstretched arm of Begovic.

The Potters fought back towards the end of the half, as Mignolet was required to acrobatically leap across to block Walters' curling 20-yard effort before Lucas nodded Shawcross' glancing attempt off the line as the Reds held onto their deserved lead going into the break.

Liverpool's initial determination to find the net in the first half was mirrored in the second 45 minutes as they could have considered themselves unlucky not to have extended their lead by the hour mark.

Sturridge failed to make the desired connection with Coutinho's cross as the ball rolled to Henderson, who quickly slammed the ball towards goal but was thwarted by the diving Begovic.

Sturridge's shooting was much more accurate minutes later when he fired a shot from a tight angle that forced Begovic to palm the ball onto the post. Aspas' aiming was a little more wayward from the resulting corner as he glanced a header narrowly wide.

The energetic Aspas was a key figure in Liverpool's attacking efforts as he teed up Henderson, who cut across the ball with a sweeping shot that agonisingly nailed the far post.

As the final whistle approached, Daniel Agger was ruled to have handled the ball in the area and Stoke were awarded a penalty as a result.

Walters assumed the set-piece duties and was dramatically thwarted as his penalty was palmed away by the diving Mignolet - sealing all three points for the Reds on a highly encouraging opening day.