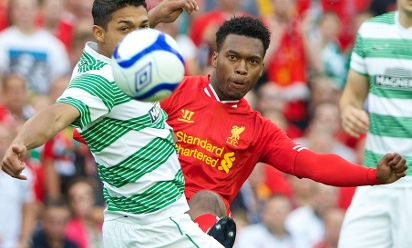 Daniel Sturridge admits he was overjoyed to make his comeback from injury in Saturday's pre-season friendly with Celtic and insisted: 'I'm ready for the new season'.

The striker entered the action at the Aviva Stadium at half-time and completed 45 minutes as Liverpool went down to a 1-0 defeat in Dublin. It was his first appearance since sustaining an ankle injury in May.

However, Sturridge's return provided a timely boost for Brendan Rodgers and co ahead of the start of 2013-14 - and afterwards, the 23-year-old was eager to praise the backroom team at Melwood for helping make a speedy rehabilitation.

He told LFC TV: "I'm delighted to be back. I want to say thanks to the physio, Matt [Konopinski], and the fitness coach, Jordan [Milsom], for all the hard work they've done with me.

"It's been a long road - a bumpy one at that - but I'm delighted to be back out there and I'm thankful to God for healing my injury so quickly because I wasn't sure I'd be back for the start of the season.

"I'm fit and good to go. If I'm selected against Stoke then I'll be ready. I didn't think I'd be as sharp as I was, to be honest, so I'm happy! I would have loved to have scored and marked my return with a goal, but the important thing was to leave the pitch healthy with no injury or anything."

Sturridge has remained at Melwood for most of the summer while his teammates jetted off around the globe for pre-season fixtures.

He continued: "It's been very difficult, to be honest. You want to be involved in pre-season and you want get your sharpness, get to know your new teammates, be able to work and get your peak fitness. I've not been able to do that - I've been at Melwood and I haven't been doing much running.

"There were some days where my ankle would hurt or I'd feel more tired than I usually would. It's been a bumpy road but we've put the work in.

"We've been staying back at Melwood until four or five o'clock every day. We've not been putting our feet up - we've been putting the work in. I'm thankful to them [Konopinski and Milsom] for all that they've done. Without them, it wouldn't have been possible - so I want to say thank you to them."

Liverpool's defeat to Celtic was their one loss in seven pre-season encounters.

Sturridge has been encouraged by what he's witnessed ahead of next week's season opener against Stoke.

"The boys have played some fantastic football," he said. "It's not the opposition that has made us look good, we've put the work in. From what I've heard during pre-season, in training the boys have been excellent and in the games they've shown what they're all about.

"We were a little unfortunate against Celtic, I think we were the better team and deserved to win. But this was a friendly at the end of the day - the big one is next week and everyone is looking forward to it."