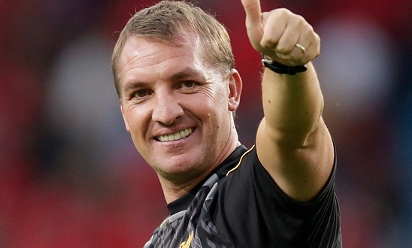 Brendan Rodgers declared himself delighted with Liverpool's pre-season form after they made it six wins out of six with a 4-1 triumph over Valerenga – but insisted his side can still improve ahead of the new campaign.

Goals from Luis Alberto, Iago Aspas, Martin Kelly and Raheem Sterling secured a win in Oslo on Wednesday evening to maintain the Reds' 100 per cent record in this summer's friendly games.

Afterwards, Rodgers told his post-match press conference: "I'm delighted with the players at the moment. I don't think they could do anymore.

"I'm disappointed with the goal [we conceded] and I mentioned that at half-time. We're always looking for perfection and to concede from a corner was disappointing.

"The players have travelled all over the world [this pre-season] - their passports have been well and truly stamped on this pre-season! But their attitude has remained the same.

"We go into our last game at the weekend [against Celtic], which will be a great way to finish off the pre-season in Dublin. I've got no doubt we'll be firing on all cylinders by the time Stoke City comes.

"I'm very pleased with everything, but we must strive to be better."

Rodgers opted to make wholesale changes at half-time in Norway, with only Andre Wisdom playin the entire 90 minutes for Liverpool.

The boss added: "Especially after Steven's testimonial where we got a lot of players 90 minutes, I felt this was a game where we would work it over two 45s. We obviously had a couple of injuries as well, which meant that young Andre Wisdom played 90 minutes.

"The plan worked quite well for us. In the first half we were really bright, sharp and moved the ball well with good control.

"I thought their goalkeeper was absolutely outstanding and made some great saves, but we were very creative.

"In the second half we probably played a little bit too deep for my liking, sometimes when it gets to 3-1 and you feel comfort in the game, it can drop you off a wee bit. But we were still a threat on the counter-attack, created a number of opportunities from that and got a couple more goals, so I can only be pleased with where we're at at this point."

Rodgers was quizzed for his thoughts on the performance of Aspas, who took his tally to four goals so far this summer following his transfer from Celta Vigo.

The manager admitted he has been delighted with the form of Liverpool's new No.9, who also played a major role in Alberto's opener after his attempted chip cannoned against the crossbar before his fellow Spaniard tucked home.

"I thought he was excellent again tonight," stated Rodgers. "When you watch him, his movement is outstanding. If you look at the movement for the second goal, he made his first run when Stewart Downing had the ball.

"The line was blocked for him and he made a double movement to come in again. Obviously he was there to finish. He's a goalscorer, that's the reason we brought him in.

"It was a lovely chip that hit the crossbar [for Alberto's goal] and it eventually came out, and we got a goal from that as well.

"He's a really exciting player and in and around the box he can make things happen. He works his socks off as well. He's done very well over the course of pre-season."

The manager replied: "My conversations with players will always remain private. I'll never disclose any conversation between a player and I.

"In terms of the remarks that were made, this is a football club that has always worked a certain way. The Liverpool Way is all about a club with ambition, a club that strives to be the very best, a club that is about commitment - that means that everyone is committed to the cause of fighting for the shirt.

"It's also about dignity and being dignified in how you speak about the club, on and off the field, and it's about unity.

"Those are the four values that run through my mind when I think about Liverpool. Those are the values we will always retain. If anyone steps outside of that standard, I will deal with it. That's something that we'll do.

"It means that we have a standard at Liverpool that I will fight for my life to retain. There will never be any player or person bigger than the club."

Rodgers continued: "Professionally, Luis Suarez has given me everything since I came into the football club, but there is obviously a way in which you have to speak. This is a club that has offered Luis Suarez the utmost respect since the day he walked through the door.

"That's something that over the course of the coming weeks you need to have when you work for Liverpool Football Club. You've got supporters and players that have given Luis Suarez absolutely everything - they backed him to the hilt.

"Even at the weekend, when we had Steven Gerrard's testimonial game, the supporters raised the roof for him. That's something that I will always fight to retain at the football club, because that is what Liverpool is about - respect, humility and real dignity."