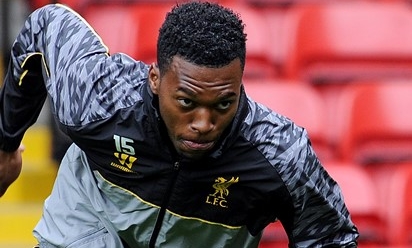 Simon sees pressure as a positive

Brendan Rodgers has delivered a promising update on the fitness comeback of Liverpool striker Daniel Sturridge after the 23-year-old returned to full training on Monday.

The No.15 suffered an ankle injury on international duty with England in May and remained at home to work on his recovery as the Reds travelled on tour to Indonesia, Australia and Thailand.

But Sturridge trained with his colleagues earlier today during an open training session at Anfield - much to the delight of the man who brought him to the club in January.

"Thankfully Daniel had his first training session today with the team and I thought he looked very, very sharp," Rodgers told Liverpoolfc.com.

"He obviously had an injury at the end of the season which set him back, but he's worked very hard along with the medical guys who have done a great job with him.

"It's a great testament to him he's kept himself fit and it was just waiting for the right time to introduce him.

"The game on Wednesday will probably be too much for him so we'll look towards the weekend.

"It's important he has another good week's training and it was great to see him back today, because for me he can be one of the top strikers in the Premier League this season.

"He's played no part in the pre-season so you put him in at the top end of the field with his pace, power and his quality and we are able to add something more to the group as well.

"So it all bodes well for us for the beginning of the season and sets us up nice and solid and exciting for the first game."