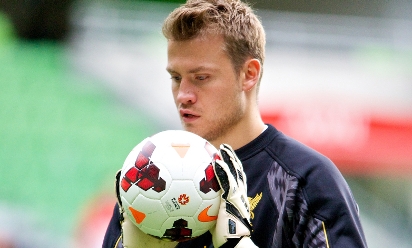 Lucas: Pre-season form can propel us

Reds goalkeeper Simon Mignolet now understands the size and importance of a club like Liverpool but argues that the pressure to achieve results can work in a positive way for himself and his teammates.

The 25-year-old stopper completed a move to Anfield at the end of June and is expected to kick off the 2013-14 campaign between the posts following Pepe Reina's season-long loan move to Napoli.

Mignolet already has three years' experience of English football after joining Sunderland in 2010, where he registered 30 clean sheets in 90 Barclays Premier League appearances.

After more than a month as a Liverpool player, which included a summer tour of Indonesia, Australia and Thailand, the Belgian has been rapidly educated about the expectations at Liverpool.

"When I first spoke to the gaffer he explained the size of Liverpool," Mignolet told the official Liverpool FC magazine.

"People from afar know Liverpool is a huge club but it's not until you come here that you truly realise it. I suppose he was in a similar position last year.

"He knew he was coming to a big club but the appreciation of that only truly arrives after a couple of weeks or months. There is a pressure every single day to achieve results. That's what we're here for.

"I don't think about pressure, though. If you sit there thinking about it, you'll only get worried. You have to accept it and focus. You can use pressure in a positive sense.

"At the end of the day that's why you become a professional football player. You live for the pressure and you try to do your best."

A vocal presence behind the Reds' back four, Mignolet exudes a sense of composure; the 'keeper adopts a philosophical approach to a position of huge responsibility.

He added: "The only thing you have to accept as a goalkeeper is that if you make a mistake, usually nobody else is there to save you.

"You are isolated and the last line before the goal. So you have to be strong when something goes wrong. Mentality is very important.

"If you have a problem, you have to get over it quickly and be able to move on. Unfortunately, goalkeepers occasionally make mistakes. I don't know one that hasn't made a mistake in his life.

"It has happened to me in the past and it will happen again in the future. But when it does, I'd like to think I'd be able to deal with it - to stand up and be strong."