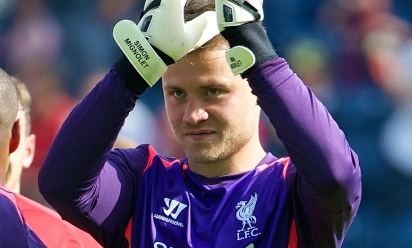 Simon Mignolet has expressed his gratitude to the players and staff at Melwood, who have helped him adjust to life on Merseyside since arriving at the start of this month.

The Belgian goalkeeper made his Liverpool debut and turned in a solid display to keep a clean sheet before being replaced by Danny Ward against Preston on Saturday.

After the game, Mignolet was keen to thank his new colleagues for the welcome he has received.

He also reserved praise for the Liverpool supporters, who packed into the Bill Shankly Kop to watch the Reds win 4-0.

"It's gone pretty quick, but I've adapted really well. I've been made really welcome - from the very first day, actually. Now I have the tour to look forward to, which is going to be a big experience for me and I am very pleased to be taking part in it.

"Today we played in front of a full crowd. And that always makes it easier to play, especially if you play the way we did in the first half in front of the Kop and in front of our supporters.

"They support you throughout the whole game and it makes it easier for you to play on the pitch. I'm looking forward to the next time."

Mignolet was rarely tested by Preston on Saturday; however, when called upon, the 'keeper was in full control.

The 25-year-old made his first meaningful contribution in a Liverpool shirt when he dived smartly to parry a Scott Laird effort on 32 minutes.

Now he insists he's keen to build on a successful debut performance over the coming weeks and months.

"I'm very pleased to be out there; to play my first game and then to end up with a great result and a clean sheet. That's obviously what you want," he said.

"You have to always remain focused and it's nice to be finding my own form again. When you play against a team like Preston, you hope to be dominant and you hope to score goals and that's what we did.

"I have to make sure that I train hard and do well in the games I play. Then whatever happens in the season and in the league is for after that. I'm just focusing on getting my fitness back and getting back to full fitness.

"I'll try to learn as much as I can in the time I have before the season starts."

Five more of Liverpool's pre-season friendlies will be available to watch live online this summer - sign up to LFC TV Online now for access starting from just £2.99.