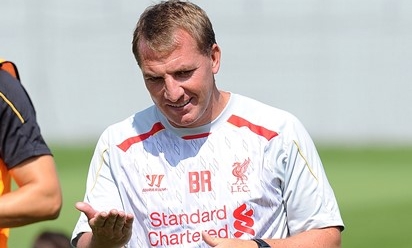 Duo in contention for Preston comeback

The audio tapes of one of Liverpool's greatest managers, Bill Shankly, have been providing inspiration for the man currently tasked with leading the Reds.

Two clubs significantly impacted by the Scot meet today when Liverpool take on Preston North End in a friendly available to watch live online from 2pm BST with an LFC TV Online subscription.

Shankly's playing career included 16 years at Deepdale before he took the reins at Anfield and laid the foundations for Liverpool's success throughout the 60s, 70s and 80s.

Today, Preston and Liverpool will battle for the Shankly Shield to mark the upcoming 100th anniversary of the Glenbuck native's birth - and Rodgers admits he has studied the great man's life and career in detail.

"Before I came into Liverpool, I was well aware of his achievements and the historic nature he has within the game of football," Rodgers told Liverpoolfc.com.

"But you really understand the impact that he made at the club when you come in and speak to the many thousands of supporters, and you speak to people like the groundsman who was here when he was here.

"He's an iconic figure for the football club and really set the club on its way to being one of the biggest clubs in the world.

"I've listened to his tapes and all of the audio; he was an inspirational man who really set the ball rolling here at Liverpool."

While Shankly took charge of the Reds for 15 years, Rodgers is currently preparing for his second season at the helm. How has the Northern Irishman changed 12 months into the job?

He continued: "I'm still the same man but with greater experience behind me. Until you come to a club like Liverpool and you have that first season here you don't really understand totally what it's like to be the manager of such an iconic club.

"But I feel comfortable now; I'm very fortunate, I've got brilliant staff around me both here at Melwood and at Chapel Street. They give me great support in my role.

"The board have been absolutely brilliant for me in my time here. We're all working unified and committed to keeping the club moving forward.

"I'm in a good place. I'm really excited and looking forward to this season. We've still got a lot of work to do."