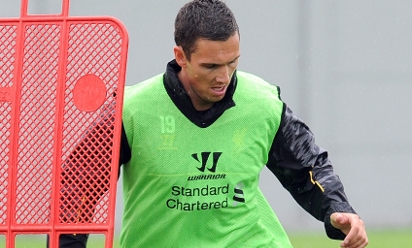 Stewart Downing has welcomed the increased competition for places he'll be facing this season due to Liverpool's summer transfer activity, insisting: 'It'll bring the best out of me.'

In addition to goalkeeper Simon Mignolet and defender Kolo Toure, the Reds have secured the services of Iago Aspas and Luis Alberto - both of whom will compete with the winger for a place in Brendan Rodgers' side this term.

It's a challenge Downing is familiar with at Anfield having had to force his way into the starting XI last season before going on to hold down a regular place in the team and make a total of 45 appearances.

Now he's ready to do the same this time around.

Downing told Liverpoolfc.com: "At every club, you need at least two or three players in every position to keep people on their toes, but especially at a club like this.

"We're fighting on many fronts - cup competitions and the league - so you have to be strong in every department. But competition brings the best out of players, and hopefully it will in me.

"My targets will be similar to when I got back into the team [last season] - enjoy it, work hard and play some good football like we did at the end of last season.

"If we play like that again as a team, we've got a real chance [of success]. For me personally, I've just got to keep going."

On the four new signings, Downing added: "They're nice lads. They're very quiet, but it's their first week at the club, so they're not used to the area, the lads and how we train.

"But you can see they're enjoying it."

Downing also faces a challenge on the international front this campaign as he tries to force his way into the England squad for the 2014 World Cup finals in Brazil next summer.

"It's been difficult as I've not played for England over the last year or so, but I'd love to play at the World Cup," he said.

"It's a year away and I've got a full season to get in the manager's thoughts. I'll just take every game as it comes and see what happens at the end of the year."

Liverpool returned to pre-season training on Tuesday and have since undertook double sessions each day as they aim to get into peak condition before the action gets underway in August.

Much of the players' work has been done using a ball, rather than the stereotypical laps of the training field.

He said: "I'm feeling good. It's been a good few days - it's been tough, but enjoyable. All the lads are enjoying it.

"We've been working with the ball, which I think is important. There's nothing worse than just running laps of the field! Using the ball is like disguised running, so the players are enjoying it more than just putting their trainers on and running about.

"You definitely get the fitness out of it - you get both the footballing bit and the fitness side. It's the perfect match."

Downing concluded: "We've had six weeks off, but the lads were all looking forward to getting back.

"There have been new signings come in and there's a bit of a buzz around the place. We can't wait to get started now and get the games underway."