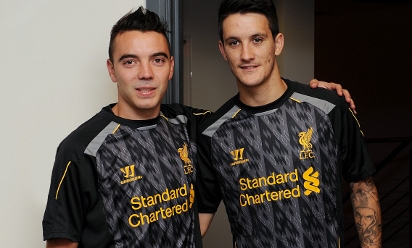 BR: Why I signed another 'keeper

Brendan Rodgers believes new signings like Iago Aspas will help give his squad a winning mentality next season.

The boss told Liverpoolfc.com that Aspas's reputation as a fierce competitor for Celta Vigo made him all the more attractive to the club this summer.

"When we sat down last year we felt we needed to bring more of that mentality into the group - players with quality but also players with a winning mentality," said Rodgers.

"Iago is a real competitor but he's also got quality as well. We're really looking forward to seeing him in action."

Another Spaniard to join the ranks this summer is Luis Alberto, a 20-year-old who impressed on loan to Barcelona B last season with 11 goals and 17 assists.

Asked if Alberto was a player for now or for the future, Rodgers replied: "Both. He's one who, over the next period of time, we'll see is an outstanding player. He fits what we're trying to do really well.

"He's a very young player but he's played competitive games, and the philosophy won't be anything new to him.

"He understands the game very well. He's got the right profile of what we want and he's another player who can score goals.

"There's no pressure. You saw with Philippe Coutinho, who came in at the beginning of the year at 20 years of age, and he was a similar profile - had experience but was young. He set the Premier League alight in his first six months here.

"Luis is big as well and hopefully he can produce for us like many of the Spanish players have done over the years."

With exclusive first interviews, training footage and live pre-season games, there has never been a better time to sign up to LFCTV Online. It costs as little as £2.99 a month - sign up now.