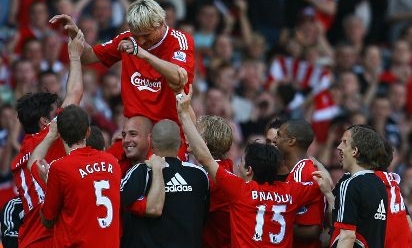 Sami Hyypia was a role model for young players according to Reds midfielder Lucas Leiva.

A rock at the heart of Liverpool's defence for 10 years, Hyypia made 464 appearances for the club, winning one Champions League, one UEFA Cup, two UEFA Super Cups, two FA Cups and two League Cups.

And ahead of the 39-year-old bringing his Bayer Leverkusen team to Merseyside for a friendly encounter on Sunday, Lucas has paid tribute to the man he played alongside for two years and expects Hyypia to receive a rapturous welcome from Reds fans upon his return.

"I had the chance to play with Sami for two or three seasons, and I was very young," Lucas told Liverpoolfc.com.

"He is a great professional and he was a great player. In the dressing room, he was the one who kept everyone together, especially the young players.

"He would try to advise you, try to give you confidence that you can go out on the pitch and do what you normally do in the training sessions.

"He was like a model for us and for me, and I am excited to meet him. Now he is in a new role and we hope he will be as successful as a manager as he was as a player."

Those attributes paint a picture of a man well suited to becoming a coach later in his career and Lucas revealed that, although perhaps earlier than expected, his teammates always believed Hyypia would make the transition.

"We knew he had a lot of knowledge about tactics, positions and everything, so we knew that he would be a manager," added the 25-year-old.

"Maybe it was quicker than we thought, but credit to him and I am delighted to see him being appointed as a manager for a big club already and at such a young age as well."

Hyypia left the Reds in 2009, a decade after being signed by Gerard Houllier from Dutch side Willem II, to join the German outfit Leverkusen. He played for a further two years there before being handed the reins as manager in April this year.

Having also captained Liverpool for two years during his time in a red shirt, the elegant centre-half is still fondly remembered around Anfield and Lucas is anticipating a fitting reception on Sunday.

He continued: "I'm sure he will get a great reception. I remember his last game, I was involved and it was very emotional.

"He played for 10 years for Liverpool so that means he really played with a lot of pride and I think he loved Liverpool. That's why the fans will try to give him a very good reception because he deserves it."

As well as an opportunity to pay homage to a former great, Sunday's fixture is also the Reds' penultimate match before the new Barclays Premier League season begins.

Currently working his way back to full fitness after a lengthy lay-off due to a knee injury, Lucas is as aware as anybody of the importance pre-season friendlies hold.

He concluded: "We had three friendlies, there are two official games and one more friendly against Leverkusen so we will have six games in total just before the Premier League starts. It's important to have minutes, to have the squad to be in the best shape."

Get your tickets for Liverpool v Bayer Leverkusen online now>>