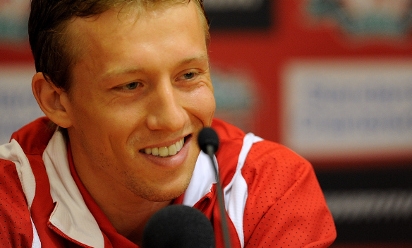 Lucas Leiva admits his first appearance at Anfield after returning from a lengthy injury will be a special moment in his career as he savours his comeback to fitness.

But three substitute appearances during the Reds' tour of North America preceded another cameo from the bench during the first leg of the Europa League third-round qualifier against FC Gomel in Belarus, and Lucas now cannot wait to feature in front of his own fans again.

"I think it will be a special moment for me when I go to warm up at Anfield or if I come on because I have been out a long time and watching from the stands," the 25-year-old told Liverpoolfc.com.

"It will be a special day for me and I hope it will be another step for me. I'm looking forward to meeting the fans again and playing at Anfield. It's where I really feel strong and comfortable and where I had very good performances before the injury. I can't wait to meet the fans again."

Lucas admitted to slight nerves about returning to competitive action against Gomel last Thursday but the fans' favourite is ecstatic to be in contention for a first-team spot once again.

He continued: "It was the first official game I was involved in, and after a long time I am just delighted to be back and happy that everything went really well with the rehab. I am just happy to be able to play again and be with the team every day in training.

"I played three friendlies, I know it's not the same but I had an idea - especially in training sessions - that I could feel I was ready to tackle and the knee was fine. So I tried to take out of my head the bad things that could happen in the game and just try to get confidence. I think it's just a question of time, minutes and training sessions."

In total, Lucas spent eight months recuperating from the injury, which was picked up during a League Cup victory over Chelsea, and he provided a fascinating insight into his battle to recover.

"The first stage is more physically because when you can't do much and you want to try to do simple things like walking and bending and get your strength back," he explained.

"But afterwards, the stage I am at now, it is more mental than physical because it comes into your head sometimes that it could happen again. But I have been training for three or four weeks already and I am just happy the way everything is going and trying to enjoy every single minute."

New boss Brendan Rodgers has been effusive in his praise of Lucas since being appointed as manager, recently describing the Brazilian as 'the ultimate professional' - and the midfielder was keen to return the compliment.

Lucas said of Rodgers: "We can feel that he is really excited to work for Liverpool and to be appointed as Liverpool manager, he is very happy that it has happened to him.

The first opportunity for Lucas to make a playing return to Anfield is the second leg of the Reds' third-round qualifier against Gomel on Thursday, and the midfielder is anticipating the match for more than one reason.

"European nights at Anfield are always special. Unfortunately last season we couldn't play any European games so I think it will be a special night and the first game of the season as well," Lucas enthused.

"There's a new manager, the fans will be excited to meet him, and Fabio Borini is a new signing. There are a lot of good things for the fans to see and I think it will be special. I hope we can get a result and start our record at Anfield this season well."

Lucas also made a point of paying tribute to Jamie Carragher, who made his 700th appearance for the Reds during the first leg against Gomel, and looked ahead to a looming landmark of his own.

He said: "We were talking about it and it is just phenomenal what he has achieved. 700 games for Liverpool - I don't think many players will reach that number of games. Well done to Jamie, he has been great for many years and he is still involved in many games and important games.

"We can see that he still wants to win and sometimes we think he is not the age that he is because he wants to win and train hard. It is a privilege to have him around and try to get closer to him, but I don't think many players will beat him soon.