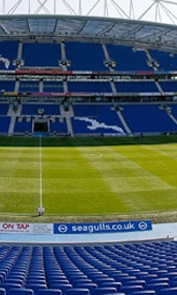 Brighton fan Scott McCarthy from WeAreBrighton.com provides the view from the Amex Stadium ahead of Sunday's clash.

How did you feel when your name followed Liverpool's out of the pot?

If it was the first time we had met this season then excitement levels would have been through the roof. Our Carling Cup date has taken away some of the novelty factor a bit, especially given the side you put out at The Amex featured most of the big names. But still, the chance to visit Anfield is one that has got most people's juices going! Given that some of the other top Premier League sides have already gone, Liverpool is one of the few big games that the draw could have thrown up, so overall we're pleased.

Excited about a trip to Anfield?

Very much so. It's a proper ground with all the tradition and atmosphere that comes with that and having not been there since 1991 there is a whole generation of Brighton fans who will be experiencing it for the first time.

You've got a chance of getting a result because...

We've got a pretty good record at Anfield in cup games. Liverpool's home form this season hasn't been amazing and we are in the midst of a very good spell having not lost so far in 2012.

One song we're bound to hear?

Sussex by the Sea. It's our signature tune and will no doubt get a good airing from the 6,000 in the away end.

Will Buckley seems to be over his injury problems now and has notched seven goals this season from 17 league appearances out wide - with only eight of them being starts. And if he is fit, which is a big if seeing as we went from October to February without seeing him on the pitch, Vicente of Valencia fame. He came off the bench recently against both Leicester and Leeds and set up last-minute winners in both.

Press us high up the pitch as the passing game we like to play across the back sometimes goes awry when teams do that and force us into mistakes. And make sure you defend until the last - we've got a habit of scoring last-minute goals to win games. Particularly from Will Buckley who has done it three times already this season.

Players you admire on our side?

Pepe Reina is a class act and obviously Steve Gerrard. And Luis Suarez is fantastic to watch.

If Brighton get a result, I will...

Be delighted we have won at Anfield, obviously. But at the same time, the next round is the same day we are due to be at Blackpool which is already all booked up and will mean losing what is promising to be a quality weekend away. Chelsea or Arsenal in the quarter-finals would make up for missing that, but knowing our luck we'd draw Crawley in the next round and end up losing.

I wasn't alive for the FA Cup final and last time we came to Liverpool was my first away game so I don't remember much of that either as I was only three at the time. Until the last few seasons, in my lifetime Brighton have offered about as much enjoyment in the FA Cup as you can get from repeatedly smacking yourself in the face. There are some cracking worst memories though, with first round defeats against the giants of Kingstonian and Sudbury Town getting honourable mentions. The worst was probably when bottom of the Football League Mansfield came to Brighton in turmoil on and off the pitch, giving us a realistic chance of making the fourth round for the first time in 16 years. Of course, we lost 3-2!

I think we'll give a good account of ourselves, but it'll be a repeat of the scoreline from The Amex with a 2-1 win for Liverpool.