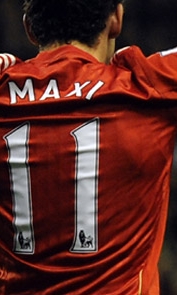 Kenny Dalglish could welcome back fit again Maxi Rodriguez into his side for our FA Cup fifth round encounter with Brighton on Sunday.

The 31-year-old has not featured since our fourth round victory over Manchester United almost three weeks ago due to a foot injury.

But having received an international call-up from Argentina this week, Maxi is now also back in contention for Liverpool.

The winger has started all but two of our cup encounters this season.

Dalglish said: "Maxi is back training. He had a kick on his foot in training but he's fine now.

"He's back in the Argentina squad which is good for him."

Dalglish has also revealed how teenage full-backs Jon Flanagan and Jack Robinson could come into his thinking when deciding the team to face Gus Poyet's men.

"Everybody who is fit is in our thinking for Sunday, even Flanno and Jack Robbo," he said. "We have had to be careful with Flanno as he has had an injury but he is back in the frame."