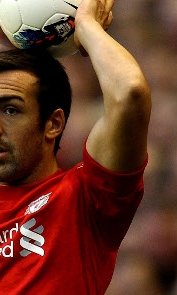 Rodolfo: My respect for Ajax

Jose Enrique believes Kenny Dalglish and the club's owners are building a squad capable of regularly competing for major honours – and thinks success in the cups this season could beckon a new era at Anfield.

The Reds will contest their first final since 2007 against Cardiff next weekend as they bid for an eighth League Cup win.

Before that, Championship side Brighton visit Anfield with a place in the FA Cup quarter-finals at stake.

Enrique admits one of the reasons he joined from Newcastle in the summer was his belief that Liverpool could win trophies, and he wants a potential victory at Wembley this term to be the first of many.

"I'm really happy already because we're in a final and I have never played in one," the 26-year-old defender told Liverpoolfc.tv. "Of course, if we can play in another one it's even more of a dream.

"This club has big history but it's not just history - we have good players now, they [the owners] want to spend money on players and want to buy good players.

"We have a really good team already but they want to make it better and that's why I came here.

"I hope it's the start of something special. That's why I came here and why many players came here this season. We came because we believe this club is going up and trying to be at the top again. Liverpool have to be there.

"I remember I heard someone say that the Champions League without Liverpool is not the same and I think that's the truth. Liverpool are always there. It's a few years we've not been there and we have to try and be there again."

Liverpool and Brighton are meeting for the second time this season after the Reds won 2-1 in the League Cup at the Amex Stadium in September thanks to goals from Craig Bellamy and Dirk Kuyt.

Enrique is expecting a tough test on Sunday tea-time despite having home advantage this time around.

"It's good that we're at home but they have a good team and a great manager, so we have to be careful," said the Spaniard. "Any team you play, it's not easy. Anyone can beat anyone.

"Of course, we're Liverpool and we have to win - but the truth is you could lose to anyone. So we have to try and be 100 per cent like every game and not believe that because we're in the Premier League we've beaten them already. That's not true.

"When you play against Manchester United and Chelsea you are motivated because they are special games, but you have to treat every game the same to win.

"When I played for Newcastle, playing against teams like Liverpool and Chelsea was a dream. Brighton will come believing they can beat us. These games are really hard because they don't give 100 per cent - they give 200.

"It's important, like the Copa del Rey in Spain, and it's a way into Europe. It's an important title and we want to go as far as we can."