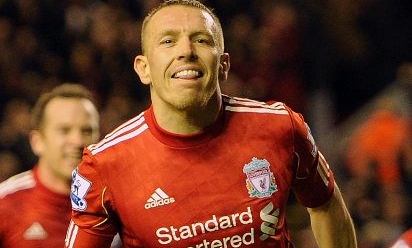 'I hope I impressed the boss'

Our No.18, who struck his 50th league goal for the club against Wolves, believes Bellamy has been superb on and off the pitch, and that his second spell at the club has been even more productive than his first.

"Craig has been unbelievable," Kuyt said in an interview with LFC magazine in this week's issue. "He came late in August and we did not pay a transfer fee.

"He has been a brilliant signing for us and looks even better now than he did the first time he came here. It's not very often you can say that about a player who plays for a club in two spells.

"Usually the first time is better but this time, with Craig in better shape, he knows exactly what he can do and he's really professional in training every day, not just helping himself but the whole of the squad."

Kuyt has rediscovered his goalscoring touch in recent games, scoring twice in the last three games, but the Dutchman never lost faith in his ability as he waited for his 50th league goal.

He added: "Ideally it would have happened sooner but often in life it doesn't always happen the way you want it. So I had to be patient.

"To achieve the number is great. Not many people have done that in the Premier League for this club but also not many people from my country in Holland have done it elsewhere so I take a bit of pride in that."

The full Kuyt interview, a breakdown of his 50 league goals and our Carling Cup final countdown begins in this week's LFC magazine.