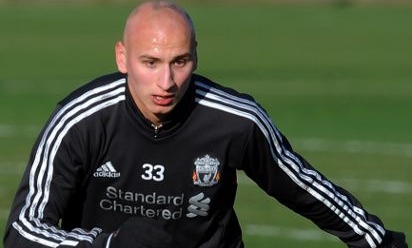 Jonjo Shelvey is hoping he can play a part in a key month of fixtures for Liverpool after impressing for the reserves on Tuesday afternoon in front of Kenny Dalglish.

The midfielder scored for Rodolfo Borrell's second string in a comprehensive 4-0 victory over Norwich City at Melwood.

And with the likes of Dalglish, Steve Clarke and Kevin Keen watching from the sidelines, Shelvey is hoping he caught the eye as the Reds first team gear up for a busy run of games that includes the Carling Cup final against Cardiff at Wembley.

"It was good to get out there and have a run out. It was a good performance and the scoreline showed that, even though it was a weakened Norwich side," the 19-year-old told Liverpoolfc.tv.

"It was good to be out there and get a game because I haven't played much recently, so it was good to show the boss what I can do."

Shelvey added: "I want to try and play in the FA Cup (against Brighton) and hopefully be a part of the (Carling Cup) final. That would be lovely and something I could tell my grandkids about when I have them in the future!

"I just want to keep pushing on in training every day and try to force my hand. Hopefully I can get a few starts and come off the bench."

First up for Liverpool is a trip to Old Trafford to face Manchester United on Saturday.

Shelvey already has experience of playing away to Alex Ferguson's side for the Reds having come on as a substitute in last season's FA Cup third round tie.

Although Liverpool lost 1-0 that afternoon, Shelvey is confident they are capable of getting the result they desire this time around.

"Games don't come much bigger," he said. "I come on last year there in the FA Cup. It was a great atmosphere to play in.

"Hopefully I can be on the bench on Saturday, but we'll have to wait and see. It will be a great atmosphere and we'll have a great set of fans (travelling) there.

"It's a stadium you want to play at, along with your Anfields and your Emirates. It was a dream come true to come on for the Liverpool first team at Old Trafford and getting a run out. It was a good experience, even though we lost."

He added: "Our record shows we've performed better against the bigger teams. We need to start winning more games at home and turn the draws into wins. Hopefully we can do that - I think it is only a matter of time.

"We are dominating teams, as you saw against Wolves last week. Hopefully we can start doing that at home."

Shelvey was one of several players lining up the for the reserves with first-team experience on Tuesday.

The No.33 was joined by the likes of Fabio Aurelio, Sebastian Coates, Jon Flanagan, Jack Robinson and Brad Jones in a strong XI.

However, it was Nathan Eccleston who set Liverpool on their way to victory with a seventh-minute effort. The striker was on target again before half-time and goals from Raheem Sterling and Shelvey completed the rout.

He said: "An early goal in any football game helps. When Nathan got the goal, it took the pressure off us and allowed us to get the ball down and start to play. It was good for him to get the goal too.

"It was good to play because you can help the younger lads. I'm still young myself, so I am still listening to the more senior players like Fab (Aurelio) and Seb (Coates)."