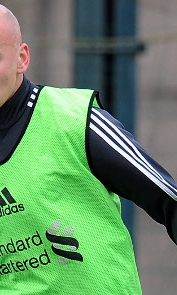 Jonjo Shelvey was on the mark as a strong Liverpool Reserve side beat Norwich City 4-0 at Melwood on Tuesday afternoon.

The midfielder played the full 90 minutes and Nathan Eccleston was a double marksman.

Raheem Sterling netted the other goal for Rodolfo Borrell's side.

Due to the condition of the playing surface at Kirkby, a late decision was taken to move the fixture to the first team training complex at Melwood.

Fabio Aurelio played the entire 90 minutes on the left side of midfield while Sebastian Coates was an impressive performer at the back.

Jack Robinson played for an hour on his return from injury, while Brad Jones got a run-out in goal.

Borrell's charges played some outstanding football on the day and could have scored more than four.

Eccleston opened the scoring after seven minutes with a close range finish after an excellent run and cross from Jon Flanagan.

The striker then hit the bar before he made it 2-0 after 39 minutes when he slotted home from a Sterling assist.

The talented winger then made it 3-0 with a great finish from a tight angle.

Shelvey then made it 4-0 with an opportunist strike after more good work from Sterling.