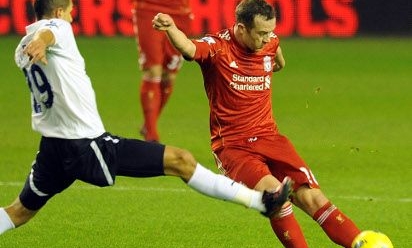 Statistics from Monday night's 0-0 draw against Tottenham at Anfield show how Charlie Adam was at the heart of the action for Kenny Dalglish's side.

The Scot stood out in the Liverpool midfield in terms of his distribution. He hit more passes than any player on the park (69) and had more touches than any other (92). He was the most accurate midfield passer in a red shirt, with an 87 per cent completion rate.

Meanwhile for Harry Redknapp's side, Gareth Bale shone in the attacking stakes, taking six shots on goal (Niko Kranjcar and Luca Modric had one attempt each while for Liverpool Steven Gerrard took three). Modric was the most exact on the field when it came to picking out a teammate, with 93.8 per cent accuracy.

Dalglish's men fired in 32 crosses compared to Tottenham's 12. However, Spurs were much more accurate as 41.7 per cent of their crosses were successful. Liverpool had an accuracy rate of 25 per cent.

Spurs were forced to make over twice the amount of clearances than the home side (32-15).

Tottenham made over twice as many interceptions as Liverpool (30-14) and the Reds had double the amount of corners (8-4).

The home side launched themselves into 25 tackles, winning 84 per cent. Tottenham, on the other hand, won 93.3 per cent of their 15 tackles.

Between the sticks, the statistics show that both 'keepers saw roughly the same amount of action. Pepe Reina was forced to make three saves while Brad Friedel stopped four.

Both goalkeepers had about the same amount of touches, Reina with 36 and Friedel with 37.

Liverpool's stopper edged his opposite number in terms of distribution. The Spaniard hit a total of 20 passes, 75 per cent of which went straight to a red shirt. His American counterpart played 13 and had a pass accuracy of 61.5 per cent.

Liverpool's forwards were far more active than their Spurs counterparts. Emmanuel Adebayor had just one strike at Reina's goal, while his replacement Louis Saha failed to register an effort throughout the 18 minutes he was on the field.

In contrast, Andy Carroll, Craig Bellamy and Luis Suarez had a combined seven shots, five of which were from inside the Tottenham penalty area.

Craig Bellamy impressed defensively, dashing back to win all four of his tackles. The Welshman also had by far the best pass accuracy of all the Liverpool forwards (93.1 per cent).

Glen Johnson saw plenty of the ball with 90 touches and was solid, winning all of the four tackles he attempted and making four interceptions.

Click here for all the Opta stats from the game>>