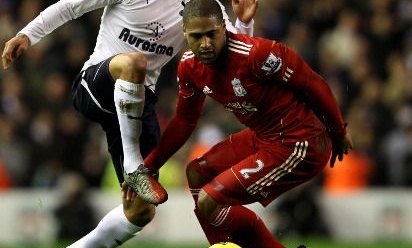 The Reds dominated long periods of the contest and created several chances, but were unable to make their superiority pay against the Londoners.

"It's always frustrating when you don't win and especially when you play as well as we did," reflected Johnson.

"Spurs are a fantastic team but I felt like we did enough to win the game. It was just one of those days for us.

"They set themselves up deep and tried to catch us on the counter attack. With their pace on the break they were a threat with that.

"We tried our best to break them down but it was really difficult.

"We had a couple of decent chances and you wanted to take one and get a 1-0 but unfortunately the goal never came."

The draw with Spurs was Liverpool's eighth at Anfield in the Barclays Premier League so far this season - but Johnson feels that statistic doesn't tell the full story.

"Eight draws out of 12 doesn't sound good but I don't think the performances have reflected that," he added.

"We've played better than that suggests and have deserved more points but that's the way football goes.

"We have to move on as we've got a big game on Saturday."

Meanwhile, Johnson feels Luis Suarez can make a decisive impact upon Liverpool's fortunes over the remainder of the season after the Uruguay striker returned to action following suspension as a second-half substitute against Spurs.

"Luis is a fantastic player and it was great to have him back out there," he said.

"He's had a long break so hopefully he's refreshed and ready to put in lots of good performances for us."