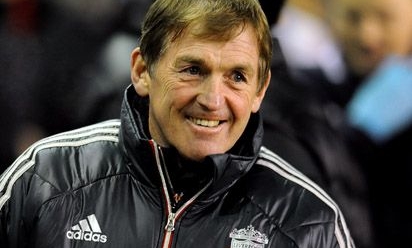 Kenny Dalglish is confident the goals will come after watching his side held to a goalless draw against Tottenham despite dominating the chance count.

Andy Carroll and Luis Suarez each had chances to win it in the second half but the Reds had to settle for a point which leaves them four adrift of fourth-placed Chelsea.

The result at least puts Pepe Reina top of the clean sheet table with 10 shut-outs (level with Joe Hart from Manchester City).

Dalglish reflected: "It's important not to lose goals but it's equally important to score goals.

"We create enough chances and have not scored the number of goals we'd have liked. We'll just keep working away. I think it was Gary Player who said, 'The harder you work, the luckier you get.' We'll keep working hard to get lucky.

"The performance was excellent, and the result? It's disappointing to come away with only a point but you cannot criticise the players for their effort or the quality of the performance. If we'd just got a kind bounce of the ball around the goalmouth we might have walked away with the three points.

"Having said that, Pepe had a one-on-one with Gareth Bale as well. Everyone has made an important contribution tonight."

Dalglish opted to name the returning Suarez on the bench.

He added: "He hasn't played since December, so it would have been a bit unfair to throw him in. He's had half an hour - that will do him the world of good. That's better than anything we can do at Melwood with him.

"Every time Luis gets on the ball you think he's going to do something. We're delighted to get him back."